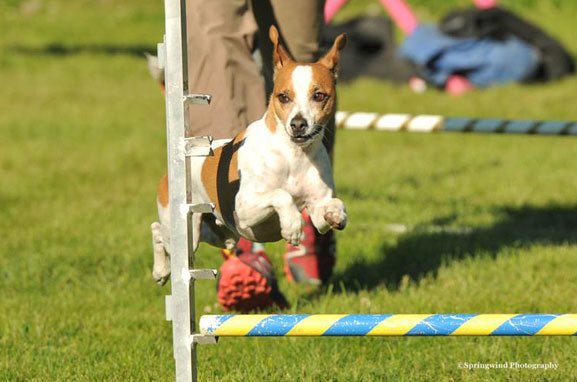 Dewey is a 7-year-old Jack Russell Terrier/Chihuahua mix and is Elise’s first agility dog. She never would have discovered the fun sport if it was not for trying desperately to find a way to keep Dewey busy!

“I got him when he was 7 weeks old, and he was a holy terror,” she said. “I had previously owned calm Whippets and Borzois so my husband and I thought this whirling dervish demon puppy was brain damaged; surely no normal puppy acted like that!”

“We went out and bought every book we could find on Jack Russells and realized that he was a very healthy and — normal — Jack!  Thus began my journey of finding Dewey a job to do, and lucky for us, agility was it.  Thanks to Dewey I have been ‘bitten by the bug’ and dearly love this sport.”

Dewey loves agility too and has exceled at the sport that allows dogs to run an obstacle course. He earned the AKC Master Agility Championship – the highest honor in AKC Agility – on Nov. 28, 2014 at the Midnight Sun Golden Retriever Club trial in Anchorage.

Dewey competes in AKC Agility through the AKC Canine Partners program for all dogs, including mixed-breeds and rescues.