Dad Takes on Daughter’s Dog & Turns Him into Rally Star 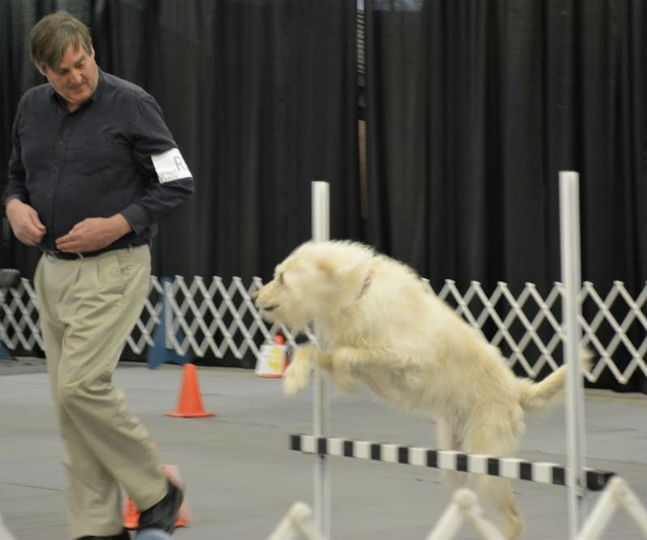 Puck showed up at the Pumphreys’ house in 2010 as an unnamed 9 week old puppy that their daughter had acquired.

“Being a mischievous young sprite, Puck (aka Robin Goodfellow) was the only name that fit,” Robert said.

Less than a year later, Puck had grown to 29 inches at the shoulders and 70-plus pounds and showed no signs of stopping. His daughter decided her father was better able to handle the big dog, and Robert took over Puck’s care and training.

Puck loved people so Robert decided to pursue therapy dog work with him.

“During spring and summer of 2011, we worked to bring his leash skills up to standards,” he said. “In October 2011, Puck passed the AKC Canine Good Citizen test with flying colors, and, the next day we tested with Pet Partners (Delta Society) and passed.”

Puck still really enjoyed the one-on-one obedience training so they entered the world of rally. In April 2012, they entered their first trial and won first place with a score of 98.

“We were hooked.  Puck now has room full of ribbons and trophies.  We have competed twice in AKC Rally Nationals, doing very nicely against fellow top teams.  For a dog that just showed up on my doorstep, earning our RAE has been a major milestone.”

Puck achieved the top title in AKC Rally – the Rally Advanced Excellent – on May 14, 2016, at the Rio Grande Kennel Club trial in Albuquerque, NM. Puck is a member of the AKC Canine Partners program for all dogs, including mixed-breed dogs and rescues.