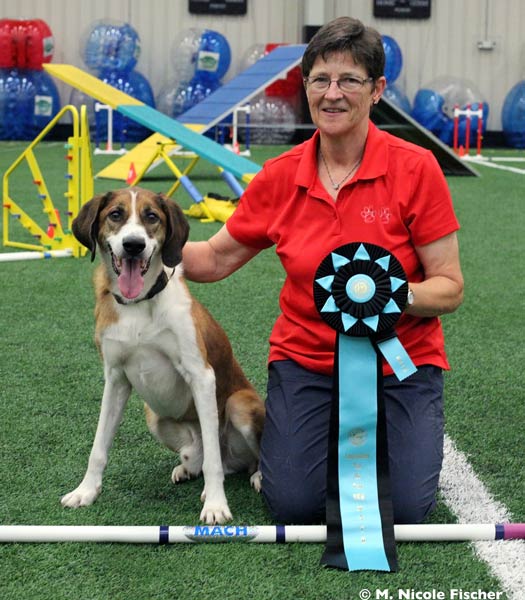 In summer 2009, Shelley stopped by her local shelter in Princeton, NJ, in search of a new companion.

“I had just lost my dog and was looking for a large, friendly dog to adopt,” she said. “The staff showed me the dogs they thought I might like, but there wasn’t a match. Then they brought out a 1 1/2 year old, 66-pound hound mix. What a bundle of energy — happy but totally without discipline or training. When he came into the office, he literally climbed up on the desk!”

Cooper had been found as a stray as a puppy in Ohio and spent 11 months, most of his life, in shelters. He never had a real home.

Cooper wasn’t at all what Shelley was looking for, but she felt that he needed a chance.

“I had been warned that he would take a lot of work, but I was up to the challenge, and they thought I could handle him. Then I found out why no one had adopted him. He was rough, strong and stubborn. He was also sweet, lovable and too cute to stay mad at!”

The first three months after Cooper’s adoption were tough. Shelley and Cooper took obedience classes, walked for miles, and ran around her large fenced yard in an effort to burn up his endless energy.

“But he still had energy to spare, and I couldn’t get him interested in games to play. He doesn’t play with toys or balls or tug of war or anything. He used that extra energy to chew furniture, eye glasses, electric cords, anything he could get. He surfed counters and tables and tested my patience, but we persevered.”

The obedience training helped, and Cooper improved. He passed the AKC Canine Good Citizen test and then Shelley decided to try channeling his energy into the sport of agility. It was a hit! Soon, Shelley enrolled Cooper in the AKC Canine Partners program for all dogs, including mixed-breeds and rescues, and entered him in agility competitions.

“He loves it or maybe it’s the treats he loves!  He’s only interested in food, and he’ll do anything to get it. I’m still amazed at what he can do and he makes me laugh every day.”