Congratulations to a Versatile All-American Dog! 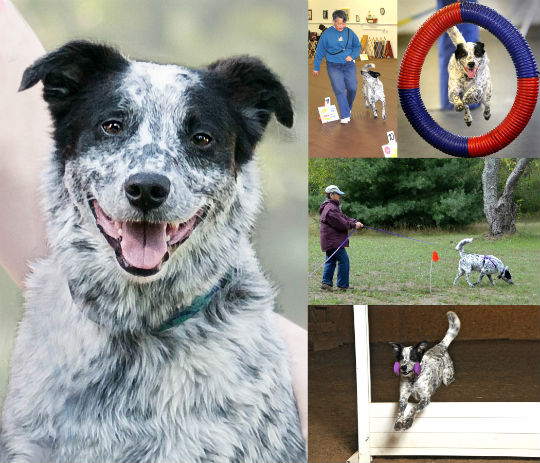 The program honors dogs who earn titles in three of the AKC Companion Events: Obedience, Agility and Tracking.

From being found wandering down a country road in fall 2008 as a puppy to achieving a VCD1 title by passing the Capitol Canine Training Club’s Tracking Dog Test on March 20, 2016, Harry has traveled a long way, says his owner Sharon Atkins of Dimondale, MI.

“During the journey, he has been a joy, a source of complete amazement and frustration, and a book of knowledge (opened or otherwise) to this first time participant in canine sports,” Sharon said.

According to DNA breed analysis, Harry is ¼ Border Collie, ¼ Australian Cattle Dog, and ¼ Airedale Terrier, with the last quarter being a mixture of other terrier breeds and a smidgen of Great Dane.

“This diversity in genetic makeup has resulted in a happy, smart, athletic, independent-thinking, and driven dog who has done very well in agility, rally, obedience (sometimes), and tracking,” she said.

Harry also has a talent for dock jumping, having a personal best distance jump of 21-feet- 9-inches.

“Harry’s favorite pastime is giving humans’ unlimited opportunities to throw the ball or toy du jour for him to retrieve,” Sharon said. “As the saying goes, he will retrieve ‘till the cows come home.’  His bovine neighbors have yet to leave the field for the barn.”

Harry is a member of the AKC Canine Partners program for all dogs, including mixed-breeds and rescues.