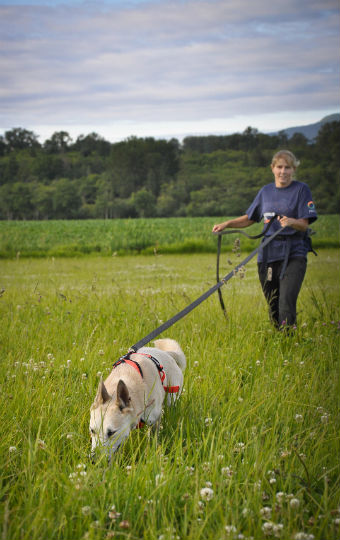 Cleo’s owner, Maia Halvorsen of Bellingham, WA, adopted Cleo from a shelter when the pup was 7 months old, and Maia was already her fourth home. “Cleo was friendly and athletic, but when I got her home I discovered I adopted Houdini; she got out of every fence/kennel I had.  Cleo and my Aussie, Star, became friends almost instantly.  My relationship with Cleo took a little longer.”

Mai tried obedience lessons and other activities, like herding and skijoring, to bond with Cleo, but nothing was working.  “She became more and more independent and less respectful of me.  Things got worse than when I got her.  Someone recently described that time as Cleo looking like ‘a fish on a lure’ and me looking nervous.”

Maia found a trainer to help her and one day at class she overheard someone talking about tracking. Cleo always had her nose to the ground and had a strong desire to follow scent so Maia decided to try it. “Within a week I was at a local hay field with Cleo and a tracking book open on the hood of my truck.  That went well, so I then went to a tracking seminar.  Cleo and I were hooked.”

Today, Cleo is 7 years old and is a member of the Summit to Sound Search and Rescue group.

Cleo is a member of the AKC Canine Partners program for all dogs, including mixed-breeds and rescues.