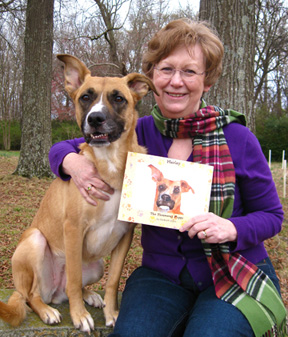 This story originally appeared in a 2011 issue of the AKC Canine Partners News newsletter. Since the story was published, Harley, now 9 years old, has earned the AKC’s highest honor in agility – the Master Agility Championship (MACH) and is now pursuing her Preferred Agility Championship (PACH).

Most puppies spend their early months being loved by their new families, showered with toys and hugs.

But Harley was not so lucky. Abandoned at a shelter, she lived for weeks in a kennel run. “A throwaway,” as Elisabeth Davis describes her.

“Quite simply, no one wanted that puppy, and she spent many, many weeks waiting to be adopted,” Elisabeth said.

But Harley’s luck changed the day Elisabeth’s son and daughter-in-law saw her picture on a website. They adopted her, changing the entire family’s life forever.

Today, Harley is winning agility competitions and also winning hearts with her incredible story. Elisabeth, a retired English professor and artist, has written a children’s book about Harley’s journey from shelter dog to star. The book’s message inspires its readers, and all proceeds from sales help shelter animals.

“The story of Harley has a lesson for all of us — that we can overcome setbacks and challenges, poor starts, and bumps along the road if we have the love and support of our family and friends, just as Harley did,” Elisabeth said.

Harley, The Throwaway Puppy was released in 2011 by Elisabeth’s publishing company – Grizzlie Books – named for the nick name her grandchildren gave her when they had trouble pronouncing “Grandma Elisabeth.”

Elisabeth, a resident of Cornelius, NC, was an English professor for more than 20 years, teaching courses in English composition, literature, technical writing and research writing. But she had never written a book. Even the original idea was just to record Harley’s story as a gift to her grandchildren.

“It actually began as a Christmas gift to all my grandchildren and to Harley’s family.  I was encouraged by family and friends to publish it to share the remarkable story of Harley.”

Not only did Elisabeth write the book, she did all the illustrations, thanks to a hobby she started a couple of years before retirement.

“I began taking watercolor classes — which I still take — and found I enjoyed it immensely.  My watercolor teacher has been very encouraging over the years as I switched from landscapes or still life to portraits of children, pets, and horses.  Everyone else in the class is painting flowers while I’m painting dogs!”

Harley, The Throwaway Puppy follows the story of Harley from her early life at an animal shelter to her first agility competition.

While Harley inspired Elisabeth to start writing books, she also got her owners involved in the sport of dog agility – an activity that now plays a dominant role in their lives. But James and Kristen Davis of Monroe, NC, knew little about the sport when they brought their puppy home five years ago.

They also knew little about Harley’s background other than that she arrived at the shelter as part of a litter of puppies. Their early work with Harley focused on gaining her trust.

“She was extremely submissive and timid with people when we first got her,” Kristen said. “…Once she got over her initial fear of us when we brought her home, she was really easy to train. She is very smart and extremely willing to please so she learns things very fast.”

As she matured, Harley also let the young couple know that she was not content to sleep on the couch all day.

“Harley, being a Boxer/German Shepherd mix, had tons of energy, and she began jumping small jumps made for our horses. However, she jumped several feet above them!” Kristen said. “At the time I was working in a vet clinic, and I knew of a client who had a champion agility dog and I asked her how to get involved.”

Soon the couple enrolled Harley in beginner agility classes, where she excelled as a natural athlete.

“While we originally got involved as something fun to do with our dog, and a confidence booster for Harley, our competitive nature took over and we were soon interested in competing,” Kristen said.

But agility has given Harley much more than ribbons and awards. As she conquered each agility obstacle, her self-confidence soared.

“While she is still nervous around strangers and men, agility has really brought her out of her shell. Our friends in agility who didn’t know us when we started are always surprised to learn how Harley reacts to strangers.”

James and Kristen also compete in agility with Mo, another rescue who was found on the side of the road as a 6-week-old puppy.

When the couple heard about Elisabeth’s idea for Harley’s book, Kristen said they were excited that it would showcase all that shelter dogs can do if they just get a second chance.

“I thought it was a great idea, especially to generate more interest in agility and mixed-breed dogs. [The finished book] also made me cry,” she said.

Another goal of the book is to help dogs and other animals that are homeless. All proceeds from sales are donated to one of three rescue groups:  Cornelius (NC) Animal Shelter; Harvest Hills Animal Shelter in Fryeburg, ME; and Tierra Madre Horse Sanctuary in Cave Creek, AZ.

Elisabeth and her husband, Stephen – a math professor at Davidson College – have their own dog, Pippen, a Chihuahua mix. “Pippen dances her happy dance at even the mention of Harley’s name,” she said. “While Pippen does not do agility herself, she is an excellent fan.”

So are Elisabeth and Stephen who attend all the local trials so they can cheer for Harley and Mo.

Harley has earned many titles, but her story would still be special even if she had never won a single ribbon.

“This is a story of the love of a family for a dog, one whom no one wanted — a throwaway puppy, but it teaches us that everyone can be a champion through love,” Elisabeth said.

For more information on the book, including how to order, go to: http://www.grizzliebooks.com/

For information on AKC Canine Partners – the AKC program for ALL dogs – go to: /dog-owners/canine-partners/