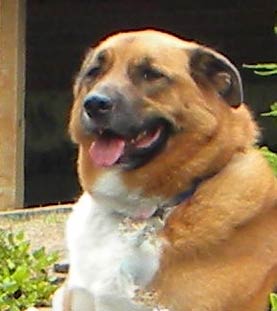 This story is brought to us by  Judy Davis. Judy and her husband, Scott, of Deming, WA, are the rescuers – and adopters – of Scott’s Sir Charlie RE. Charlie has a very special story that Judy has graciously shared with us, and we know that you will enjoy this true success tale.

My husband and I live on 20 acres surrounded by hundreds of acres of forest land nestled in the foothills of the Cascades. We moved here more than 20 years ago, and inadvertently our home became a safe haven for both wild and domestic animals. We are often asked to assist, transport or care for animals in need.  One such call came four years ago from a social worker.

The social worker gave us a quick synopsis about the plight of a pair of young dogs located a few miles from our house. They were Border Collie-mix siblings around 10 months old. A foster home had been arranged by a county animal shelter, but they needed help with transporting them as the home was more than 20 miles away.

The dogs had been left on fairly short chains wrapped around trees without shelter, food or water, and we were informed that they may not be friendly.  The temperature outside was hovering around 20 degrees with increasing wind; the roads were icy and another storm front was moving in to the area.  The dogs had been there for at least three days.

We arrived with friends who wanted to assist and found the two dogs chained to trees on opposite sides of an empty house.   They were shivering and cowered away from us as we approached. The dogs were wary but once food was offered they slowly crept forward to reach it and eventually we could pet them as they ate the small treats we offered.   Our friends decided to take one of the dogs home with them.  Charlie, the second dog, went with my husband to the foster home.

Early the following morning we received a call from the foster volunteers.  Charlie was hiding under their cars in the garage and when they approached he would growl. He had refused food and water and continually shivered.  My husband immediately drove back to get him.  By the time my husband arrived home, the two of them had become inseparable.  Charlie had found himself a new home.

Charlie is one of most intelligent dogs we have ever worked with and in that first year also was one of our greatest challenges.  When the story of his past was pieced together, we learned that he and his brother had lived a tough life. They had been beaten with hoses and shot with bird shot among other things. It took several weeks to return him to a physically healthy state and far longer to lose his fear of just about everything.

Saving Charlie became a group effort for many months as veterinarians, neighbors, colleagues, and professional trainers stepped in to help rehabilitate him.   Charlie is our first mixed-breed dog and a very different personality than the rescued Old English Sheepdogs, Golden Retrievers and setters that have shared our lives for many years.

Today, Charlie is a fearless hiking companion, carrying his own backpack and leading the way. He loves traveling and exploring wherever we go.  He’s been in large parades, fund-raising events of all kinds and maneuvers in and out of big crowds with little thought. He loves riding in cars, boats and elevators.  He is gentle with small animals, especially if they are injured or frightened. He has rescued many mice from our cats by laying his head over the mice as the cats swat him. He keeps them covered and whines until we arrive to help out. Charlie also made a visit to a Hospice facility a short time ago at the request of a very close friend who wanted to see him one more time. He entered the room and navigated through a group of people straight to her bedside where he remained throughout our visit.

Thanks to the AKC Canine Partners program, which allows mixed breed dogs like Charlie to compete in AKC events, he has completed all three levels of his AKC Rally titles and one leg of his Rally Advanced Excellent (RAE) title in the past two years.  He has competed in a few agility trials and will be competing in several more in the coming year. He loves the obstacles, especially the tunnels.

Charlie is such an easy dog to train. He is keenly observant and only needs to see something once or twice before he figures out what he needs to do and then never seems to forget. We will be trying Nose Work in the months to come.  We have lots of fun at these events and always meet new and wonderful people.  In the coming year, we are anxious to try new endeavors with Charlie and our other dogs whenever an opportunity presents itself.