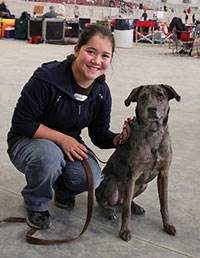 Deborah Tung is a Virginia teenager who does it all with her dogs. Deborah competes in Agility and the fun new sport of Barn Hunt with her All-American Dog, Nigel. Barn Hunt tests all dogs’ hunting ability in finding vermin, which many breeds were developed to perform. Rats are placed in heavy, safe PVC tubes and hidden in hay bales and dogs have to find so many in so much time, depending on the level of competition. In addition to agility and Barn Hunt, Deborah formerly competed in conformation Junior Showmanship with dogs owned by members of their local kennel club.

How and when did you come to own Nigel?

“We welcomed Nigel in our home when he was 7 weeks old. He was born on a local farm owned by family friends and is an Australian Shepherd mix.”

Is Nigel your first competition dog?

“I have handled other dogs in junior showmanship and the breed ring, but I wanted to train an agility dog since I was 10 years old after I volunteered at a trial hosted by the Agility Club of Chatham, Virginia.” After getting Nigel, Deborah took complete charge of his training, from puppy school to basic manners to agility classes to barn hunt.

When did Nigel start competing in Agility and what titles has he earned?

“Nigel’s first competition weekend was September 2013 at an AKC Agility trial. He earned three legs (1-FAST, 2-Jumpers with Weaves) that first weekend and was well on his way to his first title.  Nigel earned his Novice Agility Jumper title by December 2013 and his Novice Agility title in March 2014.  He has started competing in Open Agility and is currently working towards his Open titles in Agility and Jumpers.”

How did you learn about Barn Hunt and did you have an idea that Nigel would be good at this sport?

“Two of Nigel’s agility buddies (both Airedale Terriers) began competing in Barn Hunt and loved it.  The Danville Kennel Club held a seminar and fun trial in January 2014 where judge Renee Westich presented the rules and how to get started.  In February, rats were added to our family pets to assist in training. Both Nigel and Krissy compete in Barnhunt.  Nigel loves playing new games and learning new skills.  Barn Hunt allows him to lead the activity and search for his rat friends. He entered his first trial in April, earning his Instinct title and two qualifying scores towards his Novice Title.By May, Nigel earned his Novice title and is currently competing in Open Barnhunt. He likes the rats as friends, not food.”

“Nigel is active, smart and in tune with me on the agility field.  He loves to snuggle and chase his big brother, Reed, in the backyard.  He enjoys swimming with his agility buddies (Border Collies and Airedale Terriers), running with them and attempting to keep them together, but he always keeps me in sight.”

What are your future goals?

“We want to continue competing and one day, I would like to help Nigel earn a MACH title.” Other plans include helping other young people get involved in sports with their dogs. “So many people have encouraged me as I have been training my dog, I look forward to paying it forward and helping others new to dog sports.”