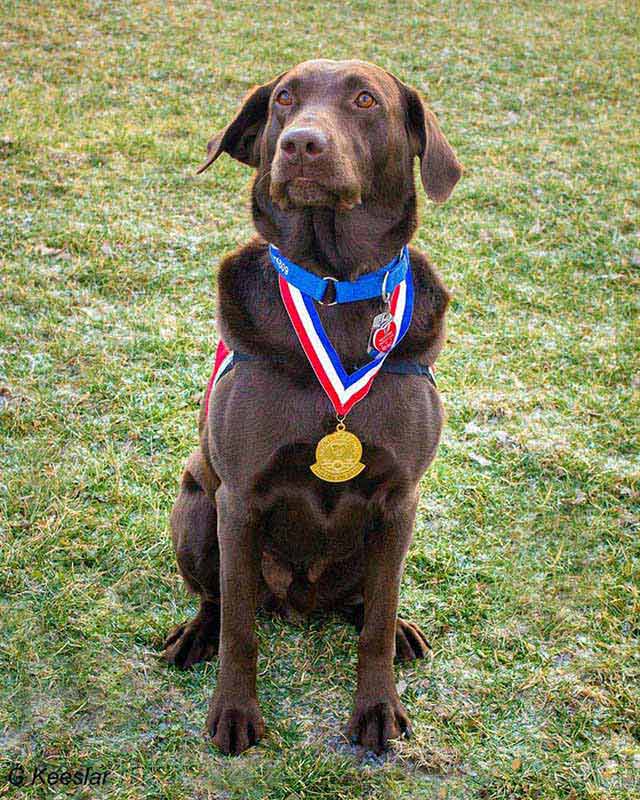 Sliwa’s Jake CD BN RE THDD CGC is known as Dr. Jake in his community. Adopted from a shelter just three years ago by Dr. Wayne Sliwa of Bluegrass, IA, Jake has become a therapy dog and service dog, as well as a successful AKC competitor through the AKC Canine Partners program. He helps the patients in Wayne’s psychology practice and also assists Wayne who has mobility issues due to a back problem. Read their story:

Sliwa’s Jake, better known as Dr. Jake, is a 6 year old chocolate Labrador Retriever, who was adopted from Quad City Animal Welfare Center in Milan, IL, when he was 3 years old.

From the moment that Wayne saw him in the shelter, Jake’s remarkable disposition and intelligence stood out.  Wayne took Jake to classes at the Quad City Obedience Club, and the handsome dog was a quick learner. He earned the AKC Canine Good Citizen, Companion Dog and American Kennel Club’s Canine Good Citizen (CGC), Companion Dog (CD), and Rally Excellent (RE) titles.

Wayne and Jake then pursued training as a therapy dog team from the Alliance of Therapy Dogs and Jake became a certified therapy dog.  In September 2015, Jake qualified for the AKC Distinguished Therapy Dog (THDD) title for assisting Wayne for more than 400 hours in his clinical psychology practice at Psychology Health Group in Davenport, IA.

With permission, Jake will place his head on the lap of the patient or push his or her hand to pet him.  These behaviors almost always result in the patient focusing on Jake and, as a result, experiencing a reduction in anxiety. For those patients needing extra attention and comfort, he will lie on their feet or nestle next to their legs for as long as the patient needs him.  At the end of the therapy session, Jake is frequently asked for a good-bye kiss or is given a good-bye kiss or hug by the patients.

Children especially like their therapy sessions with Jake.  They immediately get on the floor and start talking to him.  Many times they will tell Jake their most hidden secrets and problems when it is too hard to tell an adult.

Jake’s other responsibilities include greeting other provider’s patients in the waiting room and bringing joy and love to the secretarial staff.  Frequently other therapists request Jake’s presence in their office to provide the same therapeutic skills and behaviors that he provides in Wayne’s office.

“Jake brings an overwhelming sense of peace, acceptance, and security to my office,” Wayne said. “If I had known what a difference a therapy dog would bring, I would have invited a therapy dog to join my practice years ago. But Jake also is a very special one-of-a-kind dog.”

Recently, Jake made the transition from therapy dog to service dog. When Wayne’s back pain increased over the last two years, Jake was increasingly asked to pick up objects off the floor or get items so Wayne would not have to get up from his chair. Jake also assists Wayne when he falls due to the back problems.  A command to brace is given, and Jake stiffens his body so Wayne can place his hands on the dog’s shoulders and push up to rise to a standing position.

Soon Jake and Wayne entered the Service Dog program through Disabilities Assistance Dogs in Milan, IL, and Jake graduated in the spring 2015 with a Mobility Service Dog title!

It is very rare to find a dog that can serve as both a great therapy dog and excellent service dog as the two roles require different skills.

“The uniqueness of Dr. Jake is his ability to be aware of my needs and the needs of the patients at the same time. He is attentive to the emotional and physical needs of all the humans in the office,” Wayne said.