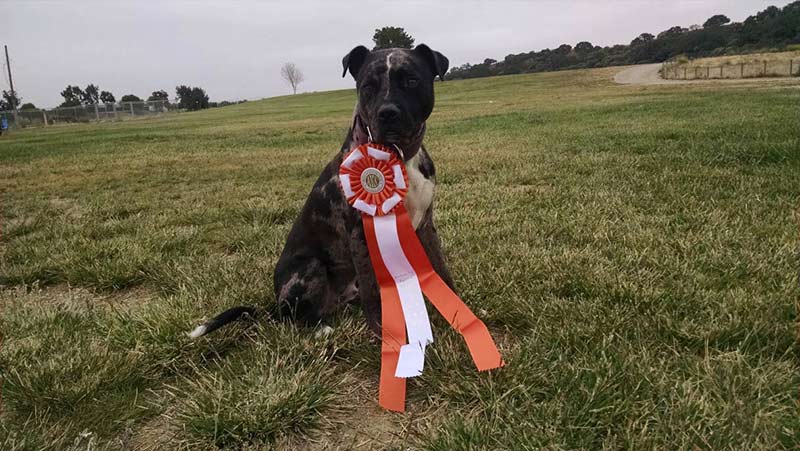 Palo was born on April 1, 2011, in the Ventura County Animal Regulations animal shelter, in Ventura, CA, after his mom, dad and 30 additional relatives were part of a large-scale humane confiscation.

After the court case was closed, Canine Adoption Rescue League (C.A.R.L.) took all the dogs.

“I saw Palo, or Radar as he was then called, posted on Petfinder, and I drove down to Ventura County from Northern California to adopt him at the age of 10 weeks,” Jackie said.

Palo has not only been a beloved pet for Jackie, but he also loves to stay active in a number of sports. His favorite is lure coursing and he completed the highest title in AKC Coursing Ability – Coursing Ability Excellent (CAX) – on May 10, 2015, through the Monterey Bay Coursing Association, in Hollister, CA.

Palo also has titled in weight pull, racing, and has recently started training in rally. He also loves to play off leash with all of his friends at dog parks and on dog hikes.

Palo competes in AKC sports through the AKC Canine Partners program for mixed-breeds. Watch him earning his CAX in this cool video: