Bella Cheers Everyone from Soldiers to Kindergarteners as Therapy Dog 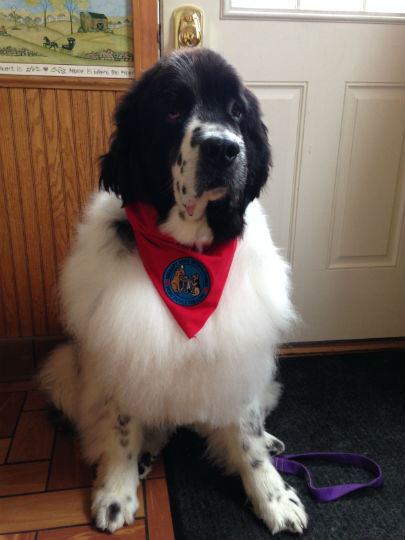 Maine resident Deanna Wade served as a Hospice volunteer and shelter manager and noticed that residents always perked up when pets came to visit. This was especially true for people who once had pets and could no longer have them because of health or age issues.

One time, Deanna and her husband, Laurence, had baby goats on their farm. They put straw hats on them and took them for visits, which really cheered everyone up.

The couple realized that their Newfoundland dog, Bella, had the right temperament to make a great therapy dog. After becoming certified, she started with troop greetings at the airport.

“These troops were returning from Iraq, and they were overjoyed to see a dog after being in a war zone for a year,” Laurence said. “This was very rewarding.”

Bella has made appearances at Boy Scout and Girl Scout events and visited libraries day cares, the YMCA, and even a reading program for kindergarteners.

“The kids read to the dogs one-on-one as they are not shy about mispronouncing words or not knowing a word,” he said. “The dogs don't care, and it works well.”

Nine-year-old Bella recently earned the AKC Therapy Dog Distinguished title for making 400-plus visits. She is a member of the AKC Canine Partners program for all dogs, including rescues.