Andretti Spaghetti – Running Fast All the Way to MACH 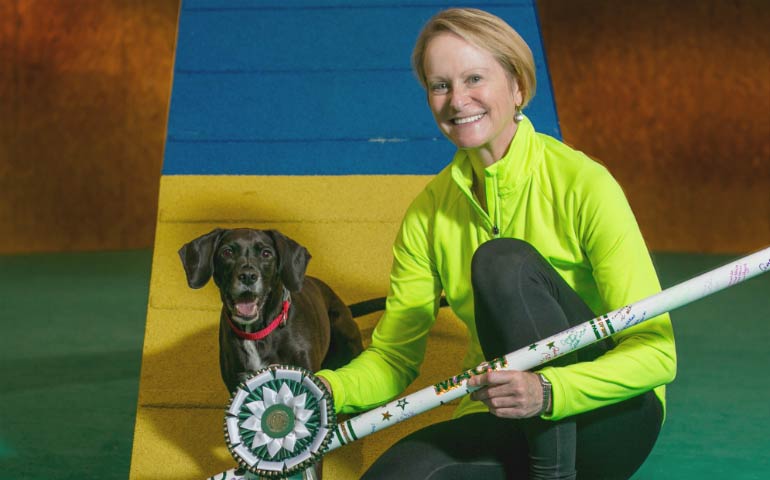 Andretti is a rescue dog whose early life is unknown. A recent X-ray revealed that he has two microchips. “You can only speculate on the chaotic nature of his puppyhood,” Inez said. “We know that he went from the Kansas Humane Society to Beagles-And-More Rescue and had at least one failed adoption before finding his forever home with us.”

The cute Beagle mix had a super high energy level and all he wanted to do in his new fenced-in yard was run fast in circles so Inez and her husband, Don, named him Andretti.  “The ‘spaghetti’ tag was added when he was registered with AKC Canine Partners as there was already a dog in the program named Andretti, and we thought it added a lighthearted note,” she said.

After a few years of Andretti being just the family dog, they decided he needed some formal training and a channel for his high drive. Inez had experience showing hunter/jumper horses and she knew that Andretti loved to run and leap high into the air for pure joy. So she researched and found an Introduction to Agility class. Andretti loved the class and advanced quickly.

In just 12 months, Inez and Andretti were competing at the AKC Agility intermediate level of Open and in another 12 months they had their first qualifying run in Master Jumpers. Andretti and Inez achieved the highest honor in AKC Agility – the Master Agility Championship (MACH) – on Aug.15, 2015 at the Dog Agility Association of the Ozarks trial in Springfield, MO.

The honor was very special considering that Andretti had lost six months of competition due to an injury caused by a slip while playing on slick ground during the winter months. It took rest and rehabilitation before he could come back onto the agility field.

“The AKC Championship was especially sweet having thought it lost,” Inez said. “What’s next on the horizon for Andretti Spaghetti? Why, working on faster course times and better handling towards MACH2, of course!”