An Agility Champion at Age 14! 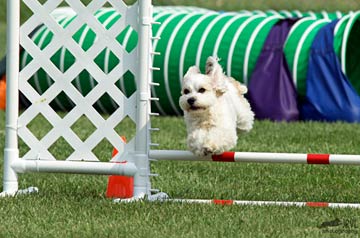 Rylee earned her Preferred Agility Championship at age 14, showing that senior dogs can still perform and like to stay active.

Molly says of Rylee: “What can I say about my first agility dog Rylee? She has changed by life in so many ways. Because of Rylee I'm doing this sport called agility and have met many new friends along the way. She has forgiven me many times as I didn't know what I was doing when we first started agility (bad handling and training on my part). When I made the decision to switch to AKC in 2011, I had to learn new handling skills. We also really struggled with the table and had many NQ’s due to her hesitation to get on the table. This too we finally conquered. Just say a little prayer and go down one knee and she hops right on. On Dec. 5, 2014, my 14 year old girl gave me the best Christmas gift ever. She got her PACH/PAX at Hounds for the Holidays trials hosted by Cream City Canines club.”

For information on joining the AKC Canine Partners community: