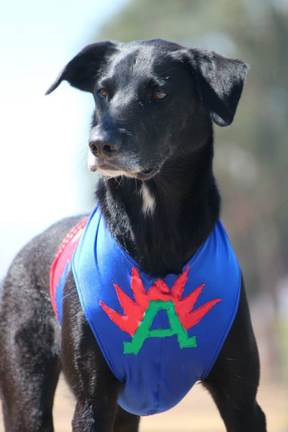 If your dog loves the water and loves to retrieve, then the fun sport of dock diving should be a natural. The AKC began recognizing titles of the new North America Diving Dogs (NADD) organization in June 2014 so now you can also add a dock jumping title to your dog’s AKC records. The sport is open to all dogs, including mixed-breeds, and one of the first NADD record-setters was an All-American Dog named Augie who achieved a 24-foot Air Retrieve to tie the world record. In addition to Air Retrieve, NADD also offers competition in Distance Jumping. For information on registering your dog with NADD and finding an event, go to www.northamericadivingdogs.com.

Read on to meet Augie and learn more about the sport:

Where ever his ball or bumper goes, so does Augie, enthusiastically flinging his long, lanky body as fast as he can in pursuit.

Even when his bumper was suspended 24 feet above a pool of water, Augie did not flinch.

He effortlessly launched himself through the air to seize it and instantly tied the world record for Air Retrieve for the new North America Diving Dogs (NADD) organization.

The 5-year-old Labrador Retriever-Border Collie mix made history in the sport of dock diving when he achieved the feat on Aug. 23 at the NADD competition held at Gold Country Training Center in Ione, CA.

Augie, who also is a big winner in the distance jumping classes, had only recently started practicing the Air Retrieve event. Air Retrieve requires dogs to grab a bumper that is suspended above the water and moved up at 1-foot increments if the dog is successful.

“We weren’t expecting what happened,” said Augie’s owner Mary Green of the big day. “When he hit 20-feet, we were so excited. At 21-feet, we were thrilled that he got a new personal best. At 22-feet, we were on pins and needles. Twenty-three feet, we were blown away — then he hit 24-feet. The next day he did it again. He is so amazing. “

Mary and her husband Lloyd of Woodside, CA, had not even heard of dock diving when they got Augie as a puppy in 2009. They had recently lost their Border Collie-Lab mix to bone cancer and a few weeks later heard about a litter of the same mix. “We had to have him,” Mary said.

Augie was a great family companion but was always active and crazed about fetch. “He never tires of it,” Mary said.

In 2011, the couple received an invitation to go with some friends to a dock diving facility about an hour away from their home. “I had recently seen dock diving on TV and I just had to try it with Augie,” she said. “Augie took to it right away.”

It wasn’t until about a year later that they entered him in a local Splash Dogs competition and discovered that they had a future champion.

“Augie had the biggest jump of the weekend and won the Super Vertical with a jump of 7-feet -8-inches. We were hooked.”

Since then, Augie has accumulated an impressive list of accomplishments in dock diving. He is the 2013 Splash Dogs Super Vertical Champion and took second place in the Extreme Division in Big Air at Splash Dogs National 2014. This year he was invited to compete in the Purina Incredible Dog Challenge Western Regionals, Mary said. He placed third after achieving a distance jump of more than 30 feet. “Our dream come true,” Mary described it.

Augie’s build definitely contributes to his athleticism. He stands 26 inches at the top of his shoulders with most of his height comprised of long, lanky legs. ”I definitely think his legginess helps. I remember when he was a puppy going to class, we would lift him in and out of my husband’s van, which has a high step. One day after class we lifted him out when we got home, and we were talking with the door still open and all of a sudden Augie appeared. It was as if he levitated up in the van.”

To keep in top shape for dock diving, Augie trains at Doggone Dirty Dock Diving in Hollister, CA, and also does backyard drills and plays lots of fetch to stay in condition.

In addition to dock diving, Augie competes in Barn Hunt and recently earned his Novice title in the sport. He is a recipient of the AKC Canine Good Citizen award and is training in Agility and K9 Nosework, as well as working on a trick dog title.

“As for the future, the sky is the limit. Augie is so willing to please that he will try anything.”

Specifics about the NADD/AKC titling program and the AKC title application form can be found in the AKC Title Recognition Program section of the AKC website.