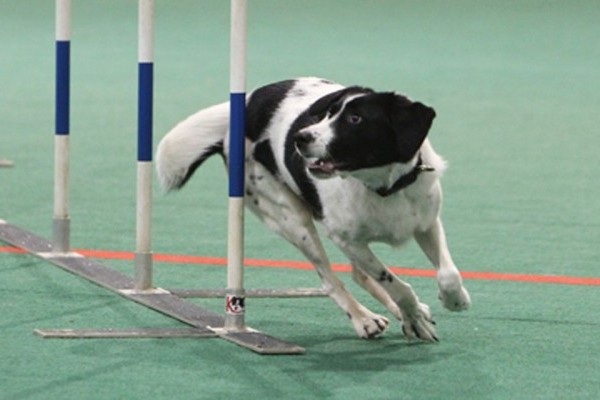 In 2008, Diana was meeting a friend at a gas station near her home to follow her to a dog event. “Upon arriving, I saw a young, mixed breed dog sitting on the curb tied to a fire hydrant. My friend ran up to my car and was very upset. She said, ‘They left him; they drove off and left him!’ I called my husband to come and pick up this poor dog and take him to our house.”

Chance was shy and had obviously been mistreated by someone. “My family and I quickly fell in love with this little dog. Although we already had three dogs and were anticipating the birth of our new puppy, we decided to keep him.”

As a competitor in agility and obedience, Diana decided that Chance needed a job too. “Seeing how shy he was, many people doubted he would ever make an agility dog.  I knew with nurturing and love that he had a ‘tiger’ in him just waiting to emerge. Once he got in the game, there was no stopping him.” On Sept. 28, 2014, at the Greater Birmingham Agility Club trial, Chance earned his MACH.

To learn more about AKC's Canine Partners program and how your dog can be like Chance, click here.