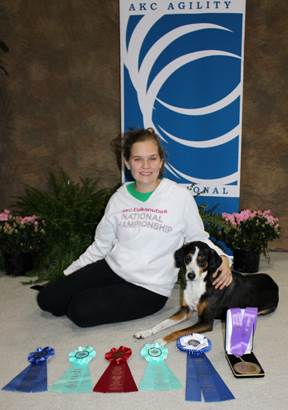 Nicole Sieling and her All-American Dog, Lillie, took first place in their division at the 2013 AKC Juniors Agility Competition held in December in Orlando, FL, in conjunction with the AKC Agility Invitational.  Nicole adopted Lillie from a shelter as a puppy, and the two have discovered dog sports together. This was their third year competing at the national event and their first time to win their class, taking home the overall top scoring dog in the 20-inch jump height Superior division. Read on to meet Nicole.

How did Lillie come into your life and when did you get her?

“Lillie came into my life seven-and-a-half years ago when my mom and I were dropping off donations at the SPCA.  We had just finished training a service dog, and it was very quiet at home.  We wanted to get another dog sometime soon but we were thinking about getting a pure-bred dog.  We decided, just for the heck of it, to look at the dogs, and my mom found Lillie.  I wanted a dog who would be good for agility and at 6 months old, Lillie was a long-legged mess.  The 6 months age was just a guess of course, as we were told she and her sister were brought down from Alabama.  The SPCA told us she was a Smooth Collie mix.  After much speculation and researching many different hounds including the American Foxhound, Harrier, and Transylvanian Hound, we finally settled on Beagle/ Whippet mix — Beagle for her ears, markings and bark/bay and Whippet for her long legs, long narrow muzzle,  and tail.”

What got you started in training dogs?

“A friend suggested that I attend a 4H dog training camp in Polk County over the summer. We took our dogs to camp for three days and learned about a different sport each day.  I had so much fun that I looked for a local 4H club where I could continue to work with my dog. I found Crazy 4 Canines 4H, based at the Dog Training Club of St. Petersburg.  That was more than six years ago. I am still actively involved with that 4H club, and every year we even put on our own dog show.”

What do you like best about working with Lillie? Is agility your only sport or do you compete in other sports with her?

“My favorite and least favorite thing about working with Lillie is that she is a challenge and has her own mind.  Sometimes she is at the top of her game, while other times she’s in her own world.  It makes winning and our accomplishments that much bigger I think. Agility is the only sport we actively compete in even though we have tried Obedience and Rally.  Agility is the most upbeat and exciting for both of us.”

How did you decide to enter the national AKC Juniors Agility Competition? What was it like to win first place in your division in the 2013 event?

“This was the third year that I entered the AKC Juniors Agility Competition.  I originally decided to participate because I thought it would be a great experience to tell my friends and family.  I kept coming back because of the people and dogs I met while there. The first two years I didn’t place. It was disappointing, but what can you do but continue training and working.   The third year (2013), I went into the ring with low expectations of winning and a goal of having fun. I guess Lillie and I were on the same wave length that day because both our Standard and Jumpers with Weaves courses were beautiful, clean runs!  Those hours of seeing my scores and then learning that I won my Standard class and got second in my JWW class by .3 seconds and then seeing that I won in my division were some of the most exciting moments of my life.”

Do you own any other dogs or pets?

“Besides Lillie, I have two cats, two rabbits, homing pigeons, chickens and another dog, a Doberman Pinscher named Kingsley.  He has competed in some small shows, however; he is still pretty young and doesn’t have the patience for waiting around for his turn to be in the show ring.   In the future, I think he will be an excellent obedience and rally dog and I would definitely like to get him involved in dock diving.”

What are your future goals for Lillie?

“I would love to continue participating in agility trials, eventually getting more titles on her. I don’t think I will be able to compete in the Juniors Agility competition next year as I age out in November. I would love to be eventually invited back into the national Agility Invitational with Lillie.”

Do you plan do to something animal-related as a career?

“I would love to become a veterinarian.  I have been around animals my entire life, and it always makes me sad when there is a sick or injured animal and I can’t help them.  Helping animals, I think is one of the coolest jobs you can have.  I’m not sure if I will specialize in any particular animal, maybe large animals like horses and cows. Only time will tell.”