Afghanistan Pup Loving Life in US 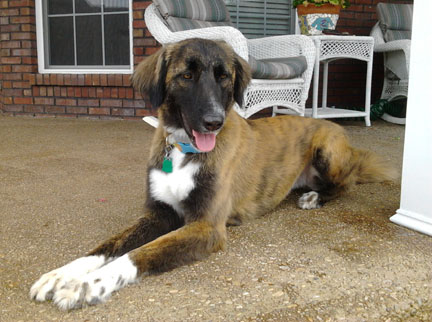 Ally spends her days like a typical suburban canine.

She watches for the squirrels and birds that wander into her yard. She plays with her favorite toy – a squeaky football.

Occasionally she breaks into a run and makes speedy loops around her house, just to show those pesky squirrels that she could catch them if she wanted.

There’s not much difference between her and the other dogs in her neighborhood except her past. A little over four years ago, Ally lived thousands of miles away in a country where her future did not look good.

She was a dog of Afghanistan, a country without pampered pet status. The country’s many stray dogs spend their days hunting for scraps and seeking shelter from the hot desert sun.

Ally’s life changed the day an Army troop discovered her while on patrol in western Afghanistan. She was a very young puppy, hiding in a cave, when the soldiers happened upon her.

“She followed them back to their camp. Her mother had been killed presumably, and she was very young and surely would have perished if they left her,” Teri Lemmons said.

Teri’s son, Michael Lemmons, was part of the 101st Airborne, 159th Aviation Brigade camp, where the puppy took up residence.

“She became a member of their unit, eating, sleeping and working alongside them and helping to keep morale up,” Teri said.

It wasn’t long before Michael was extremely attached to the new recruit.

“You know, we’d go out for physical training and she’d go run with us, she would stand in formations with us,” Michael said. “She did everything, so she was one of us.”

Michael worried about Ally and what would happen to her when his troop left. After a few months, Michael called his mother and said he wanted to try to bring Ally home. But military rules forbid soldiers to bring the dog home on a military plane or to use any military funds for transportation.

So Teri and her husband, Cliff Lemmons, went to work, researching how to get a dog from Afghanistan to their home in Louisville, KY. The cost to ship Ally to New York City was $2,500.

The couple launched a fund-raising drive via the internet and through the media. “We went on TV and starting raising money through donations to pay the expenses for her transport to the US,” Teri said. The community responded and soon they had the funds for Ally’s plane ride.

They also appealed to a group called Pilots N Paws, which normally donates flights to transport animals in need to no-kill shelters. Teri sent them an e-mail, explaining their son’s hope to save Ally.

“Within one hour, a pilot called me and offered to pick up Ally at JFK airport and fly her to Louisville,” Teri said. “They just jumped up and volunteered immediately when they saw that it was a soldier and a dog and they wanted them to be together. We never would have been able to pull it off without all the help we received from so many kind and generous people!”

Pilots N Paws is comprised of 2,000 pilots around the country who volunteer their time and use of their planes to help thousands of animals in need, said the group’s founder Deborah Boies. The organization has helped several soldiers reunite with their canine companions.

“Soldiers are over there, away from home. They live in precarious positions every day, and the dogs are a huge comfort to them,” Boies said. “It is very important to recognize the part dogs play in the lives of humans – no matter where you are.”

In late October 2009, Ally arrived in New York where Pilot N Paws picked her up and transported her to Louisville — two weeks before Michael came home.

After two tours in Iraq and another in Afghanistan, Michael and the other soldiers of the 101st arrived Nov. 18, 2009, to a hero’s welcome at Fort Campbell, KY. His family was there to greet him, and so was the young dog that would have a new life, thanks to him.

“When I returned home her reaction was priceless. Her tail just started wagging and she bolted right for me,” Michael said. “She knew exactly who I was and even recognized the other six guys who were with me out of the 600 soldiers who returned. She was just as happy to see them as well.”

Ally lived with Michael at Fort Campbell until January 2011 when he left for broadcast journalism school and then a 1-year deployment in Honduras, where he worked as a disc jockey for American Forces Network. During that time, Ally stayed with “Grandpa and Grandma” Lemmons in Louisville, where she adapted to American life very well.

“Ally is a very sweet and loving dog,” Teri said at the time. “She gets along great with other dogs and our kitty as well.

“She loves to sit out in our backyard and watch squirrels and birds.  She plays with her favorite toy, a little rubber football that Michael got her, “Teri said. “She likes to play tug of war – she is strong. She also is a fast runner and sometimes runs around our backyard like a Greyhound on a racetrack!”

Today, Ally is 5 years old and a big part of Michael’s new family, which includes his wife and baby girl, Ava. “She and Ava are best friends. Ava loves feeding her gold fish snacks. We spend a lot of time taking Ally to parks and throwing the Frisbee outside.”

Ally’s incredible story has brought her much public attention. The tale of her journey has been featured in the Louisville media and even on the ABC national news.

“To this day I still receive letters and messages on social media from people I don’t even know telling me how moved they were by our story,” Michael said. “I’m beyond grateful for all the love and support from all who was involved in making her return possible.”

All dog lovers can relate to the story of how much our canine companions help us through trying times. Michael said it was his turn to help Ally for all she gave to him and his fellow soldiers.

Learn more about the AKC Canine Partners program for all dogs, including mixed-breeds and rescues, at: /dog-owners/canine-partners/