Abandoned by the Road, Baxter Survives to Become Agility Superstar 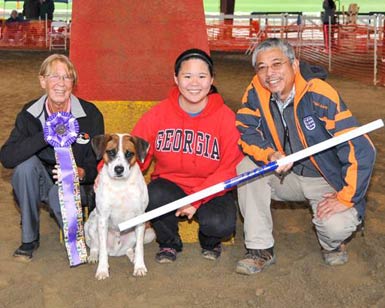 MACH Bax to the Future MXB MJB OF CAA owned by Maggie Fan of Athens, GA

“Baxter was found on the side of the road and once I was told about him, the rest was history,” Maggie said.

Maggie adopted Baxter and started training classes in basic obedience and manners. Baxter did so well that they continued training and soon they discovered the world of agility and competition, which they both enjoy.

“Baxter is my Novice A dog and has introduced me to a world we both truly love,” Maggie says. “He really lights up when we are in the agility ring, and you would never know that he was once a painfully shy, unconfident dog. I hope that we will have many more years together in the agility ring – I couldn’t ask for a better partner.”

Baxter finished the AKC Master Agility Championship (MACH) last year at an all-breed agility trial hosted by the Cocker Spaniel Specialty Club of Georgia. The MACH is the top honor in AKC Agility.

Baxter competes in AKC Agility and Coursing Ability through the AKC Canine Partners program for all dogs, including mixed-breeds and rescues. For more information, look here.