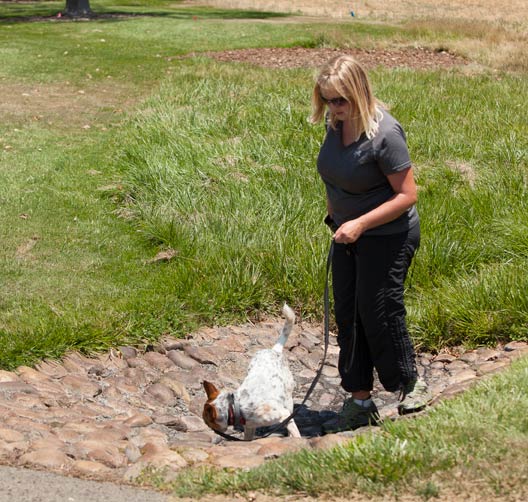 When Aryn Hervel met Crush, her first thought was “this dog needs a job.”

The petite cattle dog mix had gone through two owners who couldn’t live with her energy until dog trainer Hervel adopted her and put her to work.

Hervel channels Crush’s exuberance into agility with great success. The former shelter dog has earned the top AKC Agility title of Master Agility Champion several times over and captured first place in her division at the 2012 AKC Agility Invitational.

Crush’s other careers have included flyball and K9 Nose Work.

When Hervel’s agility friends announced they were training their dogs for real-life scent detection work, she jumped at the opportunity to place Crush in a paid position.

That was…until she heard what the dogs tracked.

“When I first heard about the sewage thing I wasn’t so sure about it. I mean, who wants to be around sewage? But after seeing how well Crush did in her first weekend of training, we were in.”

Crush is part of a group of dogs in Northern California who have been trained to detect human sewage. While it may sound unpleasant, the dogs provide a vital service towards protecting the health of residents and their waterways.

“Our primary service is using canines to locate the sources of human fecal contamination entering storm water systems. These sources can be from cross connected pipes, broken sanitary sewers, or failing septic systems,” ECS Founder Scott Reynolds said. “In addition to being a threat to the environment, bacterial levels from these sources often are responsible for beach closings and pose a threat to human health.”

Without the dogs, it can take months or even years to track the source of a sewage leak.

“The key to using the canines is that you get immediate real time results,” Reynolds said.

Reynolds and his wife, Karen, have extensive experience in training dogs for scent work. A former law enforcement officer, Reynolds worked in narcotics detection with his canine partner. Karen competed in tracking and obedience and served as head trainer for Central Oklahoma Search and Rescue.

After returning to school to earn a degree in environmental studies, Reynolds went to work for the environmental consulting and engineering firm Tetra Tech in Lansing, Michigan. One day his supervisor asked if a canine could be trained to track illicit discharges.

The idea launched Reynolds and his wife on a search to find a candidate for the experiment. The couple always owned German Shepherd Dogs, but their current two dogs were getting along in years. They felt a younger dog should start the project.

“There was a moment that we had while we were talking about what dog we might use as the prototype, and we thought ‘We should adopt a rescue’,” Scott said.

While looking online, he spotted a video of a year-old shepherd mix at an area animal sanctuary.

“He was sitting in front of woman with a ball in her hand. She threw it into a pond. He ran launched himself into the water, brought it back and wanted more. Did I mention all this time there were other dogs running around? His concentration, drive and love of water got my attention quick.”

Sable came home with the Reynolds and was a rapid learner, proving himself in the field by quickly locating contaminated areas. The couple adopted another rescue dog, Logan, for Karen to train as a second “sewage sniffer.”

In 2009 Reynolds left Tetra Tech and started ECS, transforming the four acres around his home into a training ground with pipes, manholes, and catch basins. ECS soon had a team of certified sewage detection dogs serving the Great Lakes area.

The West Coast team began after the City of Santa Barbara (CA) invited the Reynolds and their dogs to help locate the source of leaks causing problems for its residents and businesses. A highlight was the investigation of a storm drain in La Cumbre Plaza, a popular outdoor shopping area. Fecal bacteria had been present in the drain for several years. “The problem had eluded the investigators to the extent that a diversion had been installed to a waste water treatment plant to keep the bacteria from impacting a beach where the drain emptied to the ocean,” Reynolds said.

In short order, Sable and Logan tracked the contamination source to the upper end of the storm drain.  “A broken sanitary sewer was found to be discharging into the storm drain,” Reynolds said. “The break was fixed immediately by the city.”

The success got the attention of a San Francisco-area dog training group that wanted to learn to train its dogs for the task. In June 2012, Reynolds flew out to get them started on the sewage detection training. Everyone on the team is an AKC agility competitor, and the members often plan practices after trials “since we are already together,” Hervel said.

Trainers make the work like a game that results in lots of rewards for finding the right scent.

“You start with the dog finding food by pairing the food with the target odor. The food is gradually removed and now you have a dog that wants to find the target odor,” said Dustin Kerwin, member of the West Coast team with his All-American Dog, Paula.

Kerwin’s wife, Gwen Jones, took on the role of training director since both Kerwin and she are active in K9 Nose Work, a sport that tests dogs’ scenting skills but with more socially acceptable substances. Team members admit their ECS work gets them more than a few odd looks.

“One of the strangest things we’ve had to do as a team is develop a relationship with the sewage treatment plant operators so we’d have a continually fresh supply of our target odor,” Kerwin said.

Finding samples of the target odor is not the only challenge. The dogs must only signal human matter so they have to be proofed on other types of animal waste.

“You can imagine how excited we all are when one of us is able to bring raccoon poop to our group training so we can make sure the dogs don’t alert on it,” Hervel said.

Another important part of practice is preparing the dogs to work in distracting situations.

“We try to replicate scenarios we would see in the field,” Kerwin said. “This means the dogs have to be comfortable going up to manholes, working around traffic, noise, people.”

Any dog of any breed can do the work if they have the right temperament, Reynolds said. The majority of ECS dogs are rescued mixed-breeds, but also include typical working breeds: German Shepherds, Belgian Malinois and Border Collies.

“They need curiosity, ball or prey drive, endurance potential, and no aversion to the target scent of sewage,” he said.
But the most important quality is the enthusiasm to do the job.

“Crush really loves using her nose – even more than she loves agility,” Hervel said. “She is so excited when I put her harness on and she knows she gets to work.”