A Memorial to An Amazing Therapy Dog 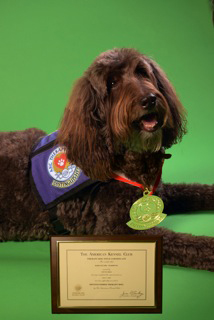 Steven Herz of New Jersey wrote this moving memorial for Koko Herz who was the first All-American Dog to earn the AKC Therapy Dog title and who passed away from cancer in February at age 12. We are honored to share it with you.

“I waited half my life to get a dog, and wound up with the dog of a lifetime.”

She was as obstinate as the day is long, willful beyond words, and single minded to a fault. She ran the house like a drill sergeant (“when I say ‘jump,’ you say ‘how high?’ “), tossing her head to the side and fixing me with that hazel eyed glare. If I didn’t move fast enough to either walk or feed her, I heard about it. She didn’t do tricks other than “shake” and “high five,” and she surely wasn’t a “kisser.” Lord knows the only way I could wangle an occasional lick was by placing my ear right next to her face as we lay side by side on the bedroom carpet watching the world through our deck doors.

During her earliest days, I noticed she would stop at the foot of neighbors’  driveways, sit, cock her head, and observe what they were doing. Later, she would saunter up to children and adults alike, walk in front of their knees and lean in to them, allowing them to pet her. To say she was a social dog would be an understatement.

But imagine a dog who had the gift to touch, enrich and leave a lasting impression on thousands of lives, as a facilitator and an enabler! Not hundreds. Thousands. To be the common denominator for providing comfort and compassion. From the elderly to schoolchildren, normal kids and those with disabilities or disorders; to soldiers, those serving and those who had served (and were now in some cases homeless); to college students during finals week; to hospital staff, and patients in recovery or in crisis; and to people who saw us every day around our gated community. She even got to address two classes of graduate students in social work at Rutgers Newark!

How much of a lasting impression? Enough so that a father across the street from our beloved Lincoln Elementary School in Newark, where the “big chocolate teddy bear” or “stuffed animal” as she was known was a fixture for years in a second grade class, told me his daughter still talked about my dog and the “Koko’s Kids” T -shirt she had received.

“What grade is your daughter in now?” I asked.

Three years later, and the little girl never forgot the chocolate dog or that T-shirt.

Then there was the woman attending an elders caregivers’ conference at Morristown Medical Center who approached us as we mingled among the crowd and said, “I’ve met your dog before. It was in the emergency room with my dad.” When I asked how long ago they were in the MMC ED, she replied, “Oh no, not here, this was at Overlook Medical Center.”

I told her we hadn’t worked at Overlook for three years, and she said, “But we never forgot this dog and how comforted she made us feel.”

She had a legion of fans and admirers that stretched all the way from Downeast Maine to North and Central New Jersey.

The life Koko had the greatest effect on, however, was mine. She changed my perceptions, attitude and thinking 180 degrees. She empowered me and enabled me to go places and see things I never thought I could handle, and to acquire a new appreciation of life. And she inspired me to embrace that age old saying, “There but for the grace of God go I,” after meeting some of my acquaintances and friends in the therapy dog world who were motivated by great personal tragedy to undertake this noble mission.

I offer no greater example than this: I lost both of my parents in a hospital, and until my mom wound up in the ICU, I had never been exposed to such a jolting sight of people hooked up to so many apparatuses, looking so hopeless. That lasting image made it impossible for me to even look at that hospital for a year whenever I drove by. Indeed, a hospital would have been the last place you would have ever found me volunteering.

Yet with Koko, we frequently dispensed compassion and comfort, and induced smiles on our tours of cardiac care ICUs, surgical recovery units, pediatric ICUs with sometimes heartbreaking cases, and two emergency departments, including trauma rooms when necessary. And it was all okay, because of that ultra soft partner by my side.

I loved our annual summer trips to our idyllic coastal village of Corea, Maine. For 10 years, she was my perfect travel companion, and thoroughly enjoyed the invigorating sights and smells we were treated to on our daily long walks. And always that much anticipated moment when we would turn off Coastal Highway One and speed over the winding, undulating single lane road that resembled a Grand Prix course, heading toward the village, her head out the window, floppy ears flying in the wind. “We’re back, big girl!” I would shout.

Back home, how she loved to sit out by the curb in front of our house upon concluding our walks, morning, noon or late at night. We became a fixture, waving to all who drove by and waved to us. I joked that I thought about erecting a cardboard cutout of myself with a pivoting arm, and tying Koko to it so she could stay out longer while I took a break inside.

Serendipity seemed to follow us everywhere. From spotting an obscure two paragraph article on the back page of a Sunday Star-Ledger section about becoming a therapy dog team that launched Koko’s long career; to my making a phone inquiry to the AKC about an application leading to her becoming one of the six “First Titlists” and the first mixed breed certified working therapy dog in the nation to receive the original ThD title; to her improbable and amusing Internet celebrity stemming from a video on an upbeat/inspirational web site (HooplaHa) that led to a West Coast online magazine article and multiple celebrity gossip/news web sites picking up the video and story about us, to earning the ThDD (Therapy Dog Distinguished) title last July. A popular doggie bakery/boutique even named an all natural best selling cookie after her. She deserved every bit of it.

But most of all, that serendipity led me to my incredible Creature Comfort Pet Therapy family, friends and partners. To the best damn pet therapy organization in New Jersey. To a decision to live off of my savings and work as a volunteer with my God sent dog to “make a difference” in the lives of others. A calling, a passion and a fire to do so, all stoked by that stubborn canine who graced this humble house for 12 years.

For 10 years, I was privileged to be her partner in our noble mission, and reap  the spiritual rewards that came our way.

I owe her so very much … there truly are no words to convey that debt. If there is an afterlife, I hope to see her again some day. For now, she is reunited with her original girlfriend Maggie, and her “A Team” working pal Willy. She was and always will be my forever girl. God bless you Koko.

It was a joyful journey.

If anyone would like to honor the memory of Koko, consider a donation to Creature Comfort Pet Therapy by going on their web site www.ccpettherapy.org, clicking on “Get Involved,” then “Make a Donation.”