A Memorial to a Special Canine Partner 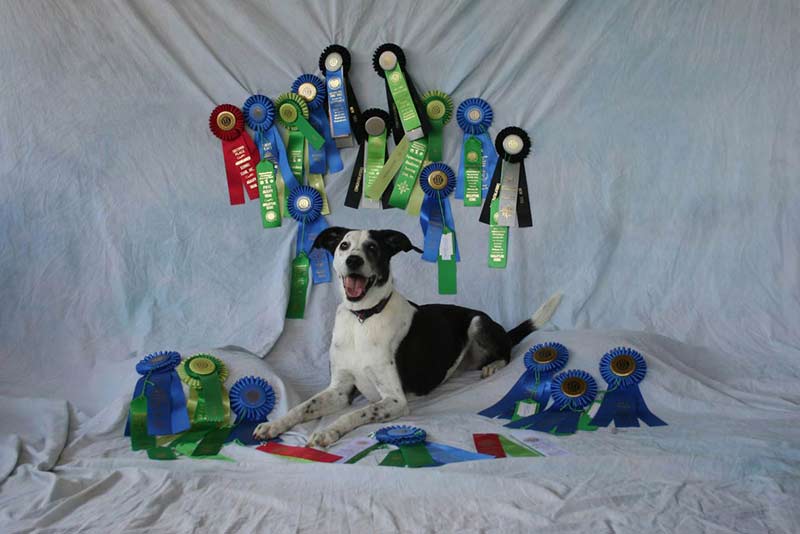 We were saddened to learn that Patches, one of the first dogs in the AKC Canine Partners program, passed away at nearly 16 years of age on Saturday, Sept. 19. Patches was formally known as He’s a Patchwork Puppy CD BN GN RAE OAP OJP OFP. He and his owner, Sheila Dempsey of Jane Lew, WV, had many achievements together since the time she adopted him after he was abandoned as a puppy on the side of a road. “Life will be hard for a while without my boy, but we had a wonderful life together and accomplished many things together; these are the memories that will get me through the tough times,” Sheila said. “He was 13 1/2 when we finished our RAE.  I cried then as I knew that was our last time in the ring together, but he had earned his retirement.” In loving memory of Patches, we re-print this feature story that ran in the first issue of the AKC Canine Partners News newsletter in fall 2011.

The couple saw a glimpse of white in the leaves as they rounded a curve so they pulled over.

Hidden inside the leaves they discovered a tiny white and black puppy. It was a lucky day for Patches.

The couple’s daughter was a member of the local kennel club – and took him in. Soon, fellow club member Sheila Dempsey offered to help out and foster the pup.

“He and I bonded so well that I decided to keep him – one of the best decisions I ever made,” said Dempsey of Jane Lew, W.Va.

Patches and Dempsey have been together for 11 years now – and Patches has come a long way from the puppy abandoned by the side of the road.

Patches – also known as He’s A PatchWork Puppy CD GN RN OAP OJP OFP – is the first mixed-breed dog in West Virginia to earn AKC titles in all three of the Canine Partners sports – Agility, Rally and Obedience. In addition, he is a certified therapy dog.

Dempsey already competed in dog sports with her beagle and other All-American dog so, naturally, she began training Patches as soon as he came home.

“He wanted to learn and to please me. I used new training techniques I had learned from seminars…  I made learning a game, which he loved to play.”

Patches earned the AKC Canine Good Citizen award when he was a year old in 1994, which gave him excellent ground work to pursue titles in a number of other sports. Dempsey is a member of the Greater Clarksburg Kennel Club – and the members work together to prepare their dogs for the CGC test and other events.

“I think the CGC is an important first step for anyone who has a dog as a family member or show dog. It teaches basic obedience and good manners that every dog needs, For Patches and me this was the first step in our career of competition for Obedience, Agility and Rally. It also helped to prepare us for our Therapy Dog certificate.”

Patches and Dempsey then competed in several non-AKC venues, accumulating a number of titles. When AKC launched the AKC Canine Partners program last year, Patches was one of the first dogs to be enrolled.

“I feel it is important to support the mixed breed program for many reasons. I have been waiting for years for the AKC to allow mixed breeds in the show ring. I have shown my Beagles at AKC events. I enjoy showing my All-American dogs, and it is not their fault they had irresponsible owners.

“AKC has taken a giant step by allowing those of us with mixed breed dogs to show. Working together we can all help educate the public about responsible dog ownership and sportsmanship.”