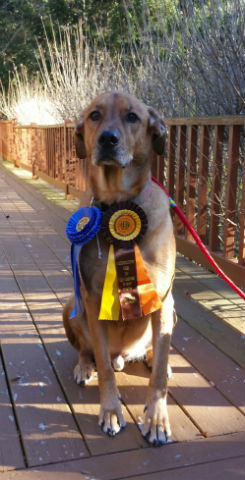 It didn’t sound that hard – Beginner Novice Obedience.  After all, we already had our AKC Canine Good Citizen and AKC Rally Novice titles!  And this is an optional title, meant to give dogs experience before the regular Novice Obedience class.  Our trainer walked us through the steps, saying, “I think Magic can do this, don’t you?”  So began the quest!

Some dogs finish their titles in a weekend or two.  Little did we know it would take us four years!

First, a little background.  In the fall of 2007 we adopted our wonderful All-American Dog, Magic, from the Springfield Humane Society in Vermont.  As we walked into the facility, he came running out to greet us – tail held high and wagging, smile a mile wide, coat of golden brown with amber eyes to match.  What a magnificent creature!

Best of all, he had a warm, gentle and loving personality!  As we greeted him inside, he gave us many kisses let us know he’d really like to be our dog.  It didn’t take much convincing; even though it was clear he had not had much leash training.  On a walk outside he pulled ahead very strongly.  He was only 16 months old and had been left behind when his family moved to California.

We fell in love with him that day, as did our Golden Retriever, Lizzy.  They were instant friends.  We took him home and changed his name to Magic.

Clearly, although he had an easy-going attitude, Magic was going to need a lot of training.  We signed him up within a few days for the Canine Good Citizen class.  Every day we walked him and worked on basic skills – not pulling, sitting, lying down, coming when called, and greeting other dogs and people graciously.  Within a few weeks he passed the CGC Test and received his certificate and rosette. How proud we were of his progress!

The training was so much fun that we continued with agility classes, tracking classes and rally classes!  We even did dog dancing and performed a Scottish March and Reel together for a final class presentation. The latter involved heeling to a very slow march, followed by very fast rally-style movements in the reel.  He did it perfectly.  What an amazing transformation we saw in our once over-energetic dog!

When the AKC Canine Partners program for mixed-breed dogs was instituted, we were thrilled.  As soon as we were able to perfect the AKC Rally Novice skills, we started to go to AKC competitions.  At our first trial, we were both incredibly nervous.  I walked Magic through the area where many dogs were showing in agility and conformation.  I could tell he was excited too.  Everyone in the kennel club was so welcoming.  We were even given an AKC Canine Partners t-shirt for being one of the dog teams to participate in the new program.

Magic passed that first rally test…….and in time, two more tests to receive his AKC Rally Novice title and new title ribbon at the Thanksgiving Classic Cluster in Springfield, MA, in November 2010.  How wonderful!!!  On to regular obedience!

So began the quest for his Beginner Novice Obedience title!  We worked hard with our trainer.  In class, he performed quite well.  How would he do in the confusion of a trial?  At our first two tries starting in April 2011, Magic did well on most skills.  But on the recall, he ran out of the ring instead of coming back to me.  Back to the drawing board!

Several more months of training…….and finally he qualified, winning fourth place.  By the next trial, he improved to second place.  Now we’re really moving ahead, or so I thought.  Surely trial number five will be the lucky one in which he achieves the third qualifying score needed to earn the Beginner Novice (BN) title.

Alas, it was not to be.  Magic kept running out of the ring on the recall.  Perhaps he was stressed by the end of the run.  Or perhaps he just wanted to greet the other dogs and people……he is such a friendly boy.

It took several more tries…….and years.  To be sure, it wasn’t all Magic’s fault that it took so long.  In the span of three of those years, I had two knee replacements, each taking six-plus months of rehab when I was unable to run, a skill we had to do together in the heeling part of the exercise.

Then our trainer retired and moved away.  A new trainer, first with private lessons and later with performance obedience classes with other dogs, took a different approach and helped Magic to overcome his recall problem.  He felt Magic was more than ready so we decided to put it to the test.

We signed up for two days of runs at the Springfield (MA) Thanksgiving Cluster, where he had won his Rally Novice title so many years ago.  On the first day, he had a nearly perfect score (only two points lost), until the recall.  He again ran out of the ring.  In spite of his NQ (non-qualifying score), I was still so proud of how well he had done on the other skills.  The judge even said he was a terrific dog.  But at least we had another chance tomorrow so we went to a parking lot at a shopping center and practiced the recall.

The next morning I was more than a bit nervous.  Would this be the day?  As we were waiting for our run, I gently talked to him in his crate.  I asked him to do it right for Lark, our other AKC Canine Partners dog, who had passed away in the summer.

We were first to enter the ring.  His heeling was not quite as strong as the day before, but the figure 8, sit for the judge’s exam, and stay during the walk around went well.  Only one exercise left – the recall.  I sat him and told him to stay, walked across the ring, and called energetically, “Magic, come!”

Like a real trouper, he bounded joyfully over to me and did a perfect front!  YES — We finally finished his title.  And best of all, he won FIRST PLACE!  As we accepted the ribbon from the judge, there were tears in my eyes.  I commented, “You have no idea how much this means to us.”  She was delighted for us as well.

It was a real journey to achieve this level.  I was incredibly proud of my magical boy for finally receiving his Beginner Novice Obedience title.  Now the only question is, “What’s next?”  Back to training we go, to get ready for more adventures in the ring together.