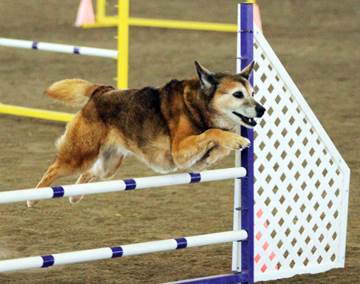 If your dog has received the AKC Canine Good Citizen (and perhaps also the AKC CGCA) title, you may have asked “What’s next?”  One answer could be the AKC Beginner Novice obedience title.

The Beginner Novice class is a great “next step” for CGC dogs since it works on advancing the skills your dog has already learned – Walking nicely on a leash, acting mannerly while being petted, performing a stay and coming when called.

And now, ALL dogs, including mixed-breeds, are eligible to compete in AKC Obedience trials through AKC Canine Partners.

Beginner Novice is an optional titling Obedience class. All exercises are conducted with dog on leash with the exception of the recall. The Heel on Leash pattern is established with Rally signs, and handlers are allowed to give one verbal encouragement.

Read more about Beginner Novice and meet two of the first All-American Dogs to earn the BN:

Teen-ager Timothy Durkee was rarely seen without his best friend – his dog Mele.

Since the day his family adopted the puppy from their local shelter, the two were inseparable – “constant companions,” his mother Pam Durkee said.

The day that Timothy left for college made the 4-year-old dog feel abandoned all over again.

Pam also had some adjustments to make without her son in the house so she decided to do something.

“I began taking Mele to various classes to help her adjust to life without him,” said the Salinas, CA resident.

Mele did so well in training that soon she was competing and earned many titles in non-AKC venues. When AKC Canine Partners program launched and opened the door to mixed-breeds, Pam made sure that Mele was one of the first dogs listed.

“We immediately enrolled her as TJ’s Melechan, named for her first and favorite human: my son Timothy James, and we started competing in AKC Agility.”

Soon Mele had earned an array of AKC Agility and Rally titles. Pam wanted to show Mele’s versatility by also competing in Obedience, but there was a problem.

“Obedience classes were a bit more difficult because Mele gets nervous in new situations.

She performs well when I can encourage her and praise her, like you can in Agility and Rally, but she found the silence of the obedience ring intimidating.  If we were training, she could heel beautifully as long as I was talking to her, but without the verbal feedback, she would become uneasy and start to lag. “

In July 2010, AKC unveiled the Beginner Novice class, and Pam’s instructor suggested it was just what Mele needed to transition into the obedience ring.

“I could praise her one time if she seemed to be losing her confidence,” Pam said. “Because the heeling pattern in the Beginner Novice class uses a sign system similar to Rally, it was more familiar to both of us – and I think it was the favorite part of the class for me.  Just like Mele, I like routine!”

Mele competed in the Beginner Novice class shortly after it launched in July 2010 and quickly earned her BN title in three straight trials with scores in the 190’s (perfect score is 200). She became the second All-American Dog (mixed-breed) to earn the BN title.

The first All-American Dog to earn the title is Tane’s Black Magic CD BN RN THD (also known as Houston), who finished the award on July 25, 2010 – just 15 days after the Beginner Novice class became a reality. Houston is owned by Shirley Buckle of Reno, NV.

Like Pam, Shirley thought the Beginner Novice class was a great place to get started in Obedience.

“I had never competed at any Obedience trial in my life, and I was very, very nervous. Houston and I had a little talk before we entered the ring. It went something like this ‘OK my friend, we are in this together and, win or lose, we are first time competitors so we may as well do the best we can.’”

It turned out Shirley had little to be nervous about. She and Houston finished their title in three straight shows from July 23- July 25 with scores of 188, 192 and 187 and a first, second and third place.

Both Pam and Shirley gained so much confidence from their success in Beginner Novice that they have continued to pursue Obedience, and now both Mele and Houston also have their Companion Dog (CD) titles, which required mostly off-lead work.

“Starting with the BN class should be encouraged for beginner dogs,” Shirley said. “This is for many reasons including:

“It all goes quite smoothly,” Shirley continued. “And the best part is then your friends rally around and tell you what a good job you both did.”

More information on the Beginner Novice class may be found in the AKC Obedience Regulations.

To search for a Beginner Novice competition in your area, access the AKC event search engine: /events/search/.