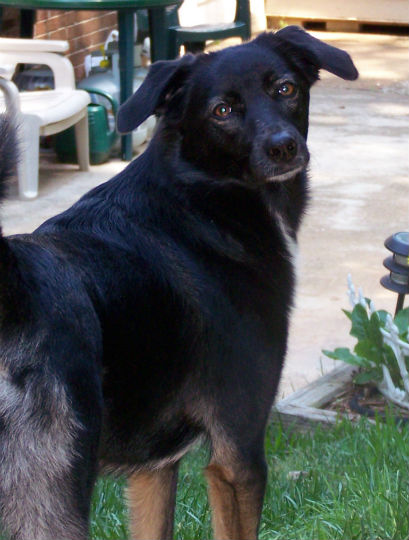 PACH Uggie Bug Jones CDX RAE AX AXJ MXP6 MXPS MJP6 MJPS PAX2 OF MFP T2BP2, aka Uggie, was discovered as a tiny puppy, freezing starving, and hiding in the yard of Shannon Jones of Cary, NC. Shannon had no intentions of keeping the pup – she just wanted to get her healthy and find a home, but sometimes things are meant to be. Uggie found her forever home with Shannon and lots of jobs. At age 13, Uggie is one of the top titled All-American Dogs in the AKC Canine Partners program, having earned an agility championship, the RAE in AKC Rally, and the CDX in AKC Obedience. Read their story:

Shannon Jones was surveying potential damage from an ice storm in her yard when her eye caught the gas grill.

Closer inspection revealed the bulge under the grill cover was a tiny trembling puppy.

“She was somewhere between 6 and 8 weeks old and very sick,” said Jones, a resident of Cary, NC.

Jones took the puppy to her veterinarian and started nursing her back to health but she had no intentions of keeping her. She already owned a dog – a Doberman Pinscher named Jessie – and her schedule was filled with agility, obedience and other dog sports events.

There was no time for another dog, she felt.

But it turned out Jessie really liked the new arrival, and the feeling was mutual.

“She got along so nicely with my other dog that she stayed,” Jones said.

Christened with the name Uggie, the black and tan mixed-breed soon demonstrated that she needed a job.

“She was very tenacious and needed something to do from the get-go. I decided to keep her after having her for about a month and began training her in obedience immediately,” Jones said.

Now 13 years old, Uggie has more than 240 titles in agility, obedience, rally, herding, freestyle, nose work, barn hunt, and drafting. She was the fourth mixed-breed dog in the country to earn the highest title in AKC Rally of Rally Advanced Excellent (RAE).

Earlier this year, Uggie finished one of the top prizes in AKC Agility – the Preferred Agility Championship (PACH) – and she still enjoys running agility and staying active.

Shannon said she was very excited when she first heard that AKC was opening events to mixed-breed dogs back in 2010. It meant that she could show her pure-bred Doberman Pinschers and Uggie at the same events, and it opened more opportunities for owners of All-American Dogs to get involved in training and events.

“This opened another venue up that all dogs can compete and earn titles in,” Jones said. “I am extremely excited for those mixed breeds living in areas where only AKC is active. This allows them to earn titles where there was never the opportunity before.”