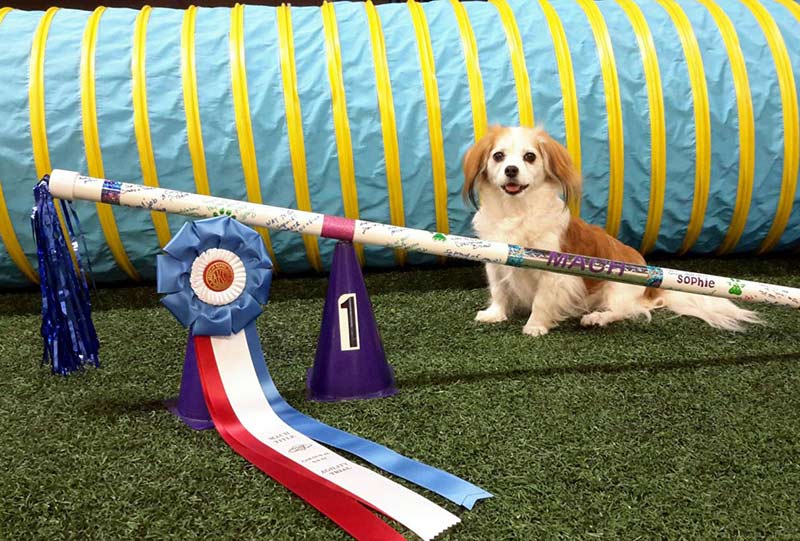 Sophie was nearly a year old when she joined the Tervelt home on February 4, 2006. Debra started her in a puppy class at the Forest City Dog Training Club just to learn some manners.

“Never in my wildest dreams would I have believed what would happen to us next,” she said.  “You might say that I got hooked on dog training with that first class.”

Debra and Sophie continued in obedience classes and then started in agility classes when Sophie was 3 years old.

“At first, I thought maybe she was too small for agility plus she hated the contact obstacles (teeter, dog walk, etc.).  She would even escape class by going under the ring gates.  But we kept practicing and slowly we improved.”

The training club had told Debra that AKC would soon open Agility and other sports to mixed-breeds.  Debra enrolled Sophie with AKC Canine Partners on the first day the program opened for registrations: October 1, 2009.  Competition started on April 1, 2010, and Sophie made her debut in AKC Agility on May 15, 2010.

Just a year later, they were already competing at the most advanced level and pursuing the top title in AKC Agility – the Master Agility Championship (MACH).

Everything was going great and then they hit a major obstacle. In October 2011, Sophie started having short seizures after runs at trials.

“Nothing that lasted for more than 10 seconds, not after every run, not every weekend; Some weekends she ran great and some weekends she would seem slow,” Debra said. “After many blood tests, she was diagnosed with an auto immune disease, hemolytic anemia.  Her own body was destroying her red blood cells faster than her body could produce them.  Two weeks later she needed a blood transfusion to get her red blood cells up to a level to keep her alive.  She also needed time to give the medications she was now taking a chance to start working.”

A few weeks after the transfusion, Sophie started to improve, and they started gradually taking her off the many medications.

“We started trialing again in January 2013.  We took it slow because she needed time to get back to her old self.”

“This was a very sweet victory.  Now I run just for fun with  Sophie.  Thank you AKC for letting me play with my little Canine Partner!”