The Welsh Terrier Is a Rugged, Friendly, and Spirited Dog 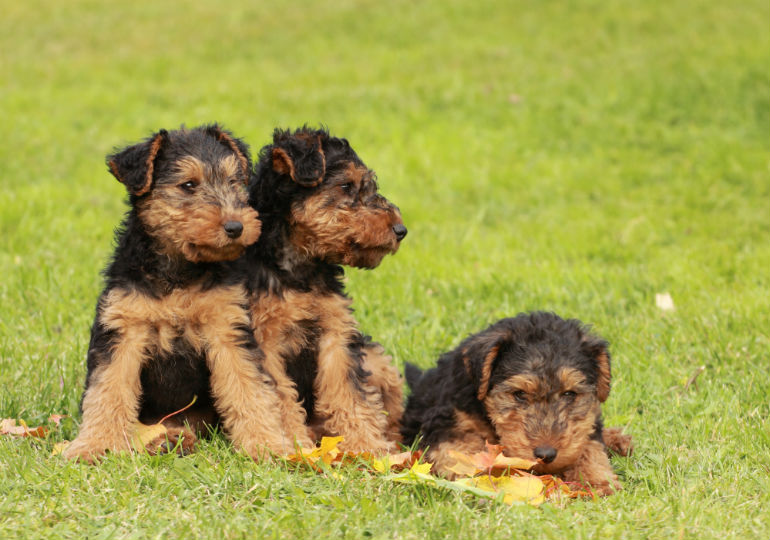 The Welsh Terrier is a medium-size sturdy, compact, and rugged terrier that originated in Wales many hundreds of years ago. In fact, some claim that it is the oldest existing dog breed in the entire United Kingdom. This spirited breed has a black-and-tan-colored, wiry coat, similar to an Airedale Terrier.

Dogs are mentioned in the earliest written histories of Wales, and they were listed in the laws of the land from 1,000 years ago. As far back as 1450, a Welsh poet spoke of a good black-and-red terrier. Despite these records, pedigrees were not kept until 1850, and the Welsh Terrier received his name five years later.

Like other terriers, the Welsh Terrier was originally bred to hunt rodents, fox, and badger. However, over the last century, it has come to be bred more for showing than for hunting, although it still retains its terrier personality.

This breed was first shown under the name “Welsh Terrier” in 1885 in Caernarfon, Wales. The first Welsh Terriers were imported to the United States by Prescott Lawrence in 1888. A short time later, in 1900, the Welsh Terrier Club of America formed. In the early sixties, a Welsh Terrier named Charlie lived in the White House as a family pet of President John F. Kennedy.

According to the breed standard, the Welsh Terrier comes in only one color combination –- black and tan. The legs, head, and underside of the body are all tan, with a black or grizzle jacket that extends along the back, up into the neck, and down onto the upper tail and upper thighs. The tan is a deep reddish color, although slightly lighter shades are acceptable.

The dog’s coat is hard, dense, and wiry to keep him protected from the elements. There is also a soft, woolly, insulating undercoat. The slightly longer wiry hair on the face, quarters, and legs is called the “furnishings.” The coat requires regular maintenance, including combing the furnishings, plenty of brushing to remove dead hair, and hand-stripping several times a year.

Puppies are born almost completely black in color. The texture of their coat is fluffy or fuzzy, and although it does shed, it needs to be removed by plucking or clipping. As the puppy ages, he will gradually develop his distinctive black-and-tan markings.

Welsh Terriers have a typical terrier temperament. They are friendly and outgoing with people and other dogs, but will not back down if they sense they are being challenged. They are relatively calm and steady, particularly in comparison with other terriers, but not as calm as a hound, for example. Considering their vermin-hunting history, use caution around other animals like cats, and be careful letting them off leash except in fenced-in areas.

The Welsh Terrier is an intelligent dog with a desire to please. However, he was developed to hunt on his own, so obedience training is a long-term activity requiring constant reinforcement to counteract the dog’s independent decision-making. In the right hands, the Welsh Terrier will be a devoted friend for either a city or country dweller.