Getting to Know the Lhasa Apso 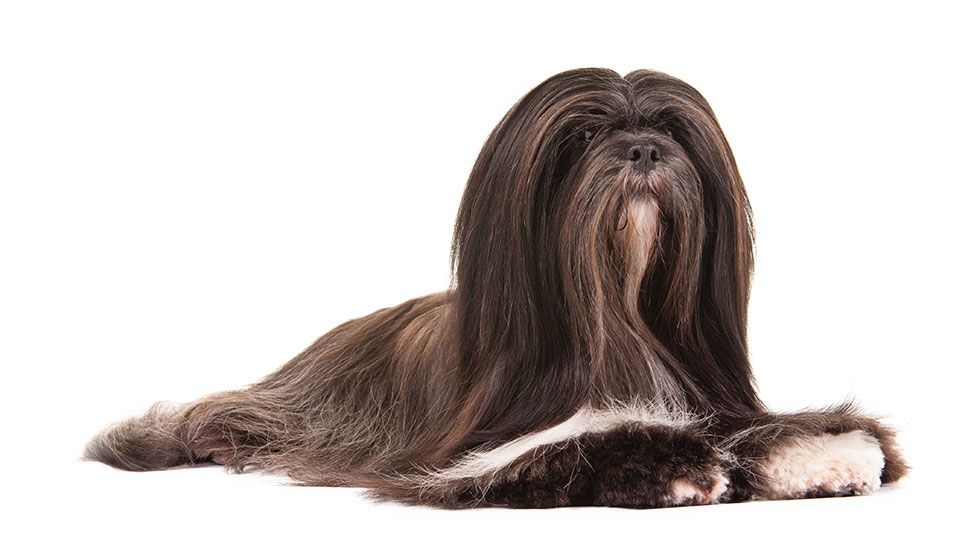 It would take a lifetime to know the Lhasa Apso breed in all its subtle, complex glory. But if you would like to own one of these ancient Tibetan charmers, or even if you’re just fascinated by the breed’s unique look and personality, here are four FAQs (Frequent Apso Questions) that will help build your breed knowledge.

Lhasas were bred for many centuries to be companions and watchdogs at isolated Tibetan monasteries. Tibet, called the “roof of the world,” is a high plateau surrounded by mountains, including the vast Himalayas. The Lhasa’s home turf is some 13,000 feet above sea level. The air is extremely thin, containing 40 percent less oxygen than is found in the lowlands. The terrain is uneven and rugged, and the temperatures are extreme.

The Lhasa was constructed to thrive in its seemingly inhospitable homeland. The compact, muscular dog beneath the flowing coat has the structure required to conserve heat on subzero Himalayan nights and the stamina to negotiate rocky mountain passes. The broad muzzle and relatively large lungs (with a body long enough to accommodate them) allow Lhasas to breathe easily at high altitudes.

The dense, weatherproof coat provides warmth on snowcapped mountaintops and acts as a sunshield in the blazing midday sun of the valleys. The feathered tail arching over the back is a parasol providing extra protection from the sun, and the lavish facial hair shields the eyes from dust and thistle.The feet are round and large, ensuring traction in snow and on treacherous, icy slopes.

The Lhasa Apso is proof that a mountain dog isn’t necessarily as big as a mountain.

What is the special significance of the breed in its homeland?

The breeders and caretakers of Lhasa Apsos were Tibetan monks, whose particular brand of Buddhism is sometimes called Lamaism and whose spiritual leader is the Dalai Lama.

The monks bred dogs for themselves as companions, watchdogs, and protectors, and also gave them as gifts to leaders of Tibetan society and foreign potentates. Since the founding of the Himalayan monasteries in the seventh century, the Tibetan dog breeds—the Lhaso Apso, Tibetan Mastiff, Tibetan Spaniel, and Tibetan Terrier chief among them—have held a special symbolic, and sometimes sacred, place in Lamaist myth.

In ancient folklore the protector of Tibet and the Lord Buddha is the Snow Lion, a mythical beast that dwells in the eastern Himalayas. The Snow Lion remains Tibet’s national symbol and is depicted on its flag. “If the snow-lion stays in the mountains it is a snow-lion,” goes an old Tibetan saying, “and if it comes down to the valleys it becomes a dog.” More particularly, it becomes a Lhasa Apso. (The Tibetan breed name is Apso Seng-kyi, which loosely translates as “bearded lion dog.”) As a living incarnation of the Snow Lion, the Lhasa Apso became the favored watchdog of Tibetan nobles and spiritual leaders, especially near the sacred city of Lhasa.

When a lama (spiritual master) died, it was believed that Lhasa Apsos would offer a temporary home to the souls of the deceased, who awaited reincarnation in a new human body. In turn, “When one of the Apsos died,” canine historian Desmond Morris writes, “a small child was identified as having become its human reincarnation.”

Another Tibetan myth tells the odd tale of a winged animal goddess named Sako. She gave birth each year to two offspring, only one of which had wings. The wingless baby was a Lhasa Apso, which would invariably fall to its death from Sako’s mountaintop nest. After many years of this neonatal incompetence, Sako finally decided to play it safe. She placed the baby Lhasa on her back and flew it gently to the ground. This, so the legend goes, is how the first Lhasa Apso arrived in Tibet.

What were they bred to do?

Pound for pound, Lhasas are the best little watchdogs in the business. For a thousand years they served as sentinel dogs at palaces and Buddhist monasteries. Their intelligence, keen senses, and uncanny knack for telling friend from foe uniquely qualified them for watchdog duty. They often worked in tandem with the imposing Tibetan Mastiff. The Lahsa would sound the alarm at the approach of an intruder, and the Tibetan Mastiff would meet the threat with some serious muscle.

Today, Lhasas keep watch at apartment-house windows and on suburban porches. As cute and mischievous as they are, their ancient sentry instincts are still acute. Deeply devoted to their human families, for whom they gladly play the clown, Lhasas are wary of strangers until proper introductions are made. They are too serenely regal to be nervous little yappers, but if there’s someone on your property up to no good a Lhasa will make sure you know about it.

How did a dog from one of the remotest locales in the world end up in America?

Because of the prominent role they played in Tibetan culture, Lhasa Apsos were a jealously guarded national treasure. It was forbidden to buy or sell a Lhasa; they could only be given as gifts to those considered worthy to receive them.

Happily for today’s Lhasa owners in America, Charles Suydam Cutting was deemed worthy—and by none other than the Dalai Lama himself. Cutting, born in 1889, is described in various sources as a socialite, financier, naturalist, explorer, big-game hunter, spy, and adventurer. With the help of his wife, Helen, he also somehow found time to be a serious dog fancier, whose Hamilton Farms kennel in New Jersey produced an influential line of German Shepherd Dogs during the breed’s great U.S. popularity in the 1920s.

Suydam and Helen Cutting, with one of their Hamilton Farms Lhasas, attend a 1949 exhibition of Tibetan culture at the Newark Museum.

The Cuttings’ great love was foreign travel, the more exotic and remote the better. In 1928, Suydam Cutting became the first Westerner to enter Lhasa, the Forbidden City. On his second visit, in 1930, he scored the ultimate coup: an audience with the 13th Dalai Lama. The two men quickly found common ground—dogs. The Dalai Lama was as passionate and knowledgeable about the subject as Cutting, and the revered holy man and the socialite-adventurer from New Jersey struck up an unlikely friendship.

Upon their return to Hamilton Farms, the Cuttings sent the Dalai Lama a mating pair of Dalmatians (in one telling of the story, it was Dachshunds). These were followed by two harlequin Great Danes, a breed of particular interest to the Dalai Lama. In the age-old custom of Tibet, the Dalai Lama reciprocated with a gift: a pair of Lhasas, Taikoo and Dinkai. The line of Lhasas the Cuttings bred from those two dogs became the foundation of the breed in America. The Cuttings’ efforts culminated in 1935, when the AKC registered its first Lhasa Apso.

This video, starring some frolicsome puppies and adult dogs, was produced by the experts at the American Lhasa Apso Club.

The Lhasa Apso is a member of the AKC Non-Sporting Group.

For more on this eclectic gathering of breeds from around the world, see “The Non-Sporting Group: The Square-Peg Breeds.”