Alysha Riel, a veterinary technician in Minnesota, was working with a local veterinarian who recommended that she get her mixed-breed dog Olive into Flyball, a relay race event complete with jumps, a springloaded box, and a ball. One class was all it took to fall in love with the world of dog sports.

Get to Know the Versatile Olive

Alysha first brought Olive home as some of her dogs grew elderly. When she found an individual looking to rehome a puppy, she jumped at the opportunity.

Olive is a small dog with a big attitude who competes in dog sports through the Canine Partners program, an opportunity that allows mixed dogs of any age to compete in dog sports like Rally and Obedience.

Olive is loaded with natural athletic ability, participating in dog sports like Flyball, Barn Hunt, and even Dock Diving, where she’s competed against the best of the best. In 2019, Olive was invited to compete in the North American Diving Dogs National Championship.

“It was just so special for us to have our little Canine Partner who got a special invitation to compete with all purebred dogs,” said Alysha. “We might not have a set lineage but it doesn’t take away from how smart or how special she is.”

Alysha was both nervous and honored to be there as it was their first-ever national competition. Olive was eight at the time, with years of experience competing in dog sports, and it felt like it was one of their last opportunities to enjoy competing on that level.

They didn’t expect Olive to win. She tied with a Danish-Swedish Farmdog and it came down to a splash off where both dogs had to do one last jump.

The judges announced the other dog as the winner.

But after the competition, Alysha’s husband reviewed the math the judges used when totaling up scores, and discovered an error. They brought it to the judge’s attention, who verified the mistake and awarded the win to the rightful winner, Olive. 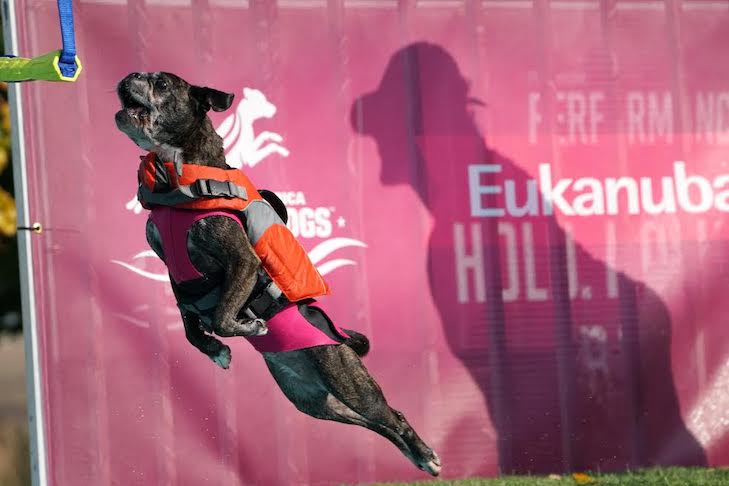 “At the end of the day, I just love the satisfied look on my dog’s face,” said Alysha. “no matter what we do, where we go, the fact that we put in a hard day’s work together as a team. That look on her face is just so satisfied.”

Now 11 years old, Olive is still as spunky as ever and still loves competing in sports. But it’s also been disappointing for Alysha to see one of Olive’s last sporting years grind to a near-halt with the pandemic.

Earlier this year, Alysha’s husband noticed Olive acting like a drunken dog. She started wobbling and staring into space. They immediately rushed her to the emergency veterinarian.

The veterinarians started suggesting and searching for potential causes of the disease. Perhaps it was something she ate? Or potentially something scarier: a brain tumor.

They had 48 hours. Each hour, she started to look a little bit better. Olive was slowly recovering.

Older dogs can experience idiopathic vestibular syndrome, something that looks like a stroke. That’s because something has gone haywire in a dog’s vestibular system in their inner ear and brain, which is responsible for helping dogs maintain balance and coordinate how they position their head, eyes, and legs.

To this day, they don’t know what caused it. Thankfully, Olive is still going strong.

Olive is a more natural athlete than Rocky. Alysha got Rocky into dog sports more for the health benefits: French Bulldogs like him are sturdy and sporty but struggle with weight control, joint issues, and can experience breathing problems.

“I find the challenge of a dog that doesn’t naturally do [dog sports] really awarding,” said Alysha. “I just really enjoy seeing the hard work and dedication that it takes to get the more stubborn dogs to do things. I relish those accomplishments.”

Even though Rocky doesn’t possess every athletic advantage Olive does, he always puts 100% into everything he does — that is, until Rocky started acting uncomfortable with one of his rear legs. One trip to the veterinarian later, they knew Rocky had a partial cruciate tear (CCL) in his knee. But that wasn’t the worst of it: the veterinarians took an x-ray of his lower region and discovered another issue.

The veterinarian told Alysha that he has “the worst hips she’s ever seen in her life.”

The Riels were left with marching orders. If Rocky didn’t start showing signs of recovery, then the plan was to start with surgery on his knees, and later consider surgery on his hips.

“He has slowly, miraculously, been recovering,” said Alysha. His knee is nearly back to normal.

Part of the credit to Rocky’s recovery is his participation in dog sports like Barn Hunt. Since he’s so athletic and trim, the veterinarian said to keep doing what they’re doing because that will help prevent injuries going forward.

Their newest four-legged family member, Zero, is a rescue who joined the family at about nine months old.

Next, it was merely a matter of discovering what Zero was naturally interested in.

Zero likes tennis balls, so maybe Flyball would be a fit. He likes water, so Dock Diving was worth a try. But as Zero grew up, Alysha noticed behavioral problems like reactivity to other dogs that prompted her to pivot from social dog sports. She looked into sports where a good athlete like Zero could shine competing against himself and settled on Barn Hunt.

All three dogs find competing in Barn Hunt incredibly rewarding. They get so excited when they find the rabbit or the rat. The body language changes and their faces light up. It’s like they say, look at me. Look at how happy I am.

As the lady of the house, Olive has taken the lead on giving Rocky and Zero guidance on using proper manners inside and outside the ring. She’s a bit of a bossy little lady and knows how to throw her weight around as the queen bee.

Regardless of where Rocky and Zero are — at home or at a show — they look to her for direction. For example, Olive taught Rocky and Zero how to relax in their crate at dog events without barking at every dog.

With COVID, Alysha and her dogs don’t have many opportunities to participate in Agility or Flyball right now. They’ve been competing in Dock Diving, a sport that’s a little more COVID-friendly since you can stay on a dock away from people. They’ve also turned their attention more to Barn Hunt. Alysha is still doing what she can with the dogs, taking part in virtual events and staying hopeful for the future. 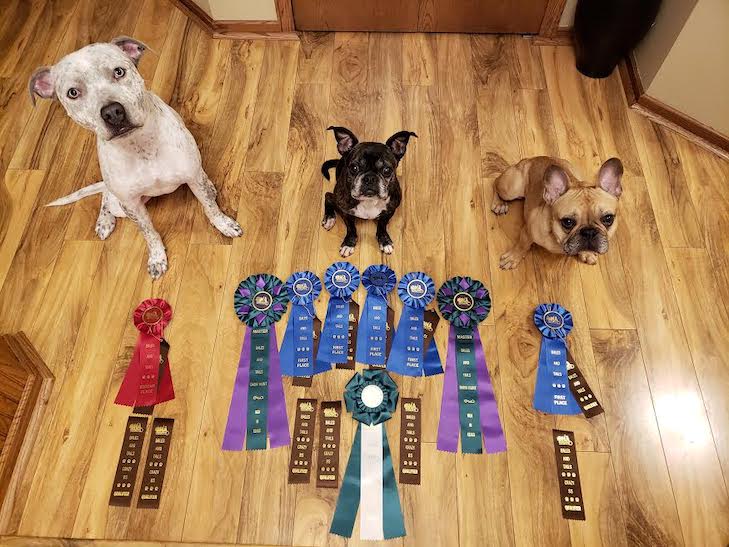 Get Started in Dog Sports

Alysha’s advice to anyone looking to get involved in dog sports is to start with a good foundation of obedience training. She says it’s also important to focus on your relationship with your canine companion.

“It’s not about always winning and it’s not about taking home a big ribbon,” said Alysha. “It’s about teaching your dog, even if you have to work from the ground up. It’s about that process.”

If you’re looking to train multiple dogs at once, try to give your dogs individual attention and a balance between training with your dog and giving them time to rest. To balance training all three dogs, Alysha carves out one night each week for each dog to give them specialized attention and training.

“Stick with it and know that there will be challenges and that’s the fun of dog sports and know that you’re on your own journey,” said Alysha.

Alysha, who teaches puppy classes, always tells her students that dog sports aren’t just for purebred dogs. Mixed dogs can have a part in the fun too.

“It’s just you and your dog, no matter what sport it is. You and your dog need to carve out time with each other each week and just really cherish each moment.”

Any breed — including mixed breeds — can participate in dog sports like Trick Dog, FAST CAT, and Diving Dogs.

Think your dog has what it takes to be Dog Athlete of the Month? Use the hashtag #ThisIsAKC on Instagram.

Related article: Flyball 101: How to Compete in Flyball for Dogs
https://www.akc.org/wp-admin/admin-ajax.php
Get Your Free AKC eBook