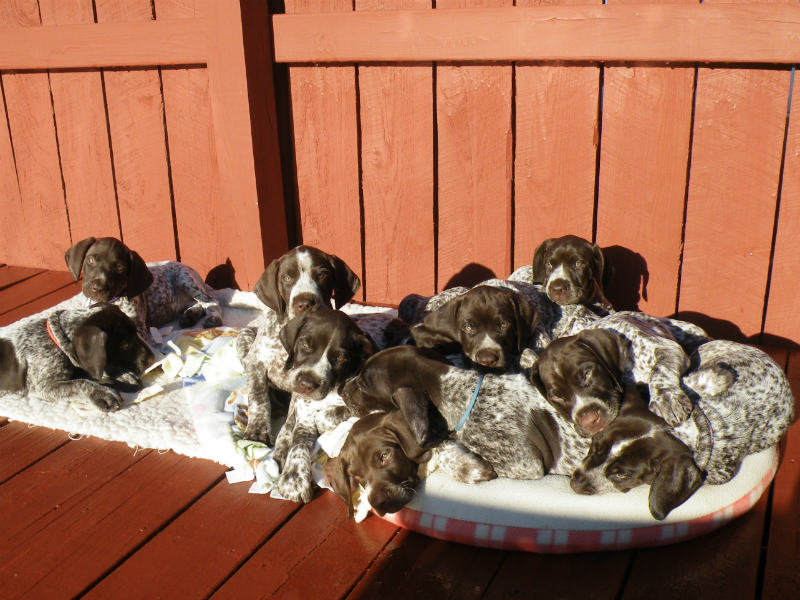 Pointers have a long history, dating back at least to the 13th century, and the German Shorthaired Pointer (GSP) comes from those roots. But he's so much more than a pointer! The breed was developed in Germany to be a versatile hunting companion that excels in hunting, pointing, and retrieving, on land and water. Some even call him a jack-of-all-trades. Lovers of these elegant dogs know that they're also affectionate and friendly, bonding closely with their family and especially with children. This athlete will love spending time with you, especially for outdoor activities.

Even puppies start pointing. German Shorthaired Pointers have natural instincts for many hunting tasks, including pointing.

As hunters and retrievers, they excel on land with large and small game, as well as with birds.

They're perfectly happy to work in brush and around other cover.

They're known for their endurance and agility, even in the water.

In fact, they enjoy the water from an early age.

As if that's not enough, they also star in dog sports.

These are highly energetic dogs, and they need plenty of exercise. It takes a lot to tire out a German Shorthaired Pointer (GSP).

A photo posted by Strutting My Daisy Dukes (@struttingmydaisydukes) on Jun 28, 2016 at 1:32pm PDT

But, as any GSP lover will tell you, they also have a goofy side.

This intelligent, animated, and highly versatile gun dog has long been a favorite of hunters and active families alike. His excellence in the field is matched only by his deep attachment to his family.

Think this friendly, smart, and willing to please dog is the breed for you? Check out German Shorthaired Pointer puppies on AKC Marketplace.