How Judges Learn to Evaluate a Newly Recognized Breed 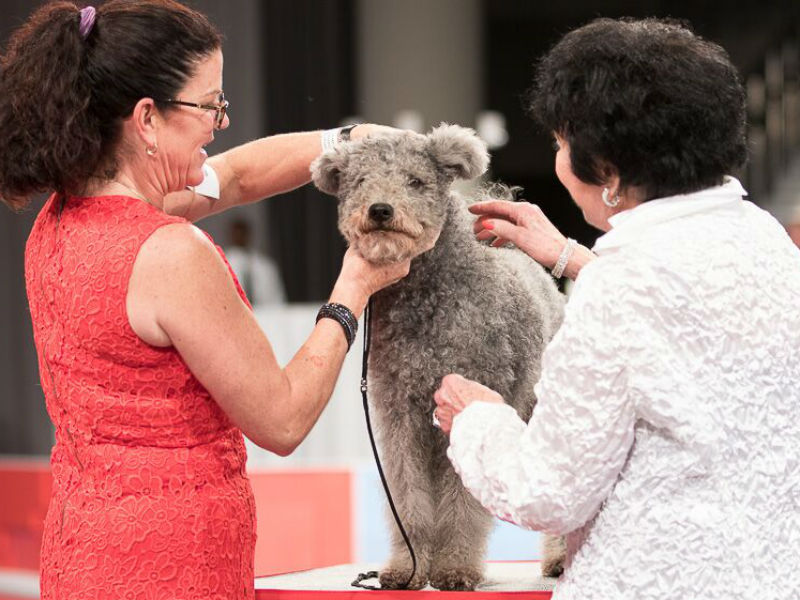 This year’s three newcomers reflect plenty of crowd-pleasing and judging diversity from just about every angle.

The American Hairless Terrier developed in the United States in the early 1970s and is known for its lively, intelligent, and friendly personality. This breed will most likely be a common sight in conformation, agility, and obedience going forward. It will be shown in the Terrier Group.

The ancient Hungarian herding breed, the Pumi, is a perky, medium-sized character with wavy and curly hair. Noted for its intelligence, willingness to work, and quick learning ability, it is an ideal companion for the active family and an excellent candidate for a wide mix of dog sports. It will be presented in the Herding Group.

A sighthound with origins in North Africa, the Sloughi (pronounced SLOO-ghee), is rich in history and culture. Bred hunt game, such as gazelles, jackals, wild boar, hares and rabbits, the short-coated dog has become a companion breed in this country and is highly adept at lure coursing and treasured for its hunting skills. It will be exhibited in the Hound Group.

The journey to full AKC recognition does not happen overnight. It begins with the AKC Foundation Stock Service, and proceeds to the Miscellaneous Class with a wide mix of criteria, where it competes typically for one-to-three years. When all the basic requirements are met, the breed is then presented to the AKC Board of Directors for full recognition.

Find a complete explanation of the process here.

The AKC recognized the American Hairless Terrier and the Sloughi last January, and the Pumi came aboard in late June, so all have seen plenty of ring exposure pre-Westminster.

So how does a judge prepare to evaluate a new breed? It varies, depending on whether the individual is certified to judge the entire group in which the new breed is placed. All those approved to judge the entire group must simply pass an open-book test and pay a fee. If the person is not approved to judge the group, he/she must undergo a get-acquainted process with the breed that includes educational seminars, mentoring, kennel visits, etc., before being tested. To provide prospective judges with a hands-on experience, dogs are usually present at the seminars.

Additional groundwork for a breed judging application includes attending shows with large entries, preferably national or regional specialties, and observing judging with a breed mentor, and perhaps going to a breeder’s home to see a number of dogs and discuss the breed’s idiosyncrasies with breeders and handlers. “There is nothing better than seeing dogs with both positive and negative traits one sees in the breed when being shown,” emphasizes Richardson. “It is very useful in training one’s eye to look at the breed.”

Eventually, the applicant will be tested on the written standard of the breed, followed by an oral interview with the AKC regional representative, who again poses questions on the standard. Upon passing this hurdle, the applicant is granted a “permit” status, meaning he/she judges the breed three times as a “permit’ judge.

Adding a bit to the challenge and complexity is geography: Most new breeds don’t have large numbers in all areas of the country, rather a dedicated core group sometimes situated in only one or two regions.

Of the three Westminster judges, Meredith-Cavanna probably has the closest familiarity with the breed she will be placing her hands on. She has judged the Pumi at Federation Cynologique Internationale (FCI) shows in Europe and in the AKC Miscellaneous Class prior to the breed being accepted into AKC. Also, her sister owned a pet female Pumi, which died of cancer six months ago. “The breed is adorable,” Meredith-Cavanna enthuses.

We asked some experienced judges what key questions they would ask followers of a new breed in order to acquaint themselves with that breed. Here are some of their responses:

What makes the breed unique? — In other words, what makes it what it is? How did you become interested in the breed? How long have you been associated with the breed? Cite any known health problems it is noted for. What is the most important characteristic to emphasize when evaluating the breed?

The new breed’s show presentation for a handler is equally challenging, since in many cases the handler is left to wonder about the judge’s knowledge and familiarity with the breed.

Chris Levy, of Salem, Ore., president of the Hungarian Pumi Club of America, says, “We’ve had only seven months’ experience with full AKC status. The club did everything it could to educate the judges on this rare breed, which included providing 21 judging seminars nationwide over the past six years. Over 150-plus attended, but only 47 are now approved to judge the Pumi.

“Every breed has very particular characteristics (breed type) that an experienced judge would know and understand, having seen many specimens of that breed. A judge also needs to form a vision in his mind of the ideal dog of that breed to compare to the dogs before him. Without that background experience and a vision of the ‘perfect dog,’ a judge may have a difficult time ranking the dogs in a class.”

Having bred and shown other breeds over four decades with her husband, Tom, including the Shiba Inu when it was introduced to AKC conformation events, Levy shares her experience: “We just have to be patient and continue educating the judges.”

Kathy Knoles, of Springfield, Ill., has been presenting the American Hairless Terrier since last April. “Because the breed is so new, and many judges are not familiar with it, who is judging is not a concern when I make my entries. I greatly appreciate when a judge takes a minute to ask questions about this beautiful breed.”

She offers information to a judge any time she is asked. And that interaction occasionally extends to those not even judging that breed, but asking questions about it.

Like Levy and Knoles, American Sloughi Association Vice President and Judges Education Coordinator Erika Wyatt, of Maple Park, Ill., says judges’ education is critical, but there is a threshold she is careful not to cross. When asked if she discusses or interacts with a judge later in the day after her dog was shown before him/her, she responded, “Only if the judge initiates the interaction. As exhibitors, it is important at all times to respect the person and the process.”

Judges and exhibitors agree there is a wide array of dynamics at play with the presentation of new breeds. That mix ranges from the spirit of challenge at one end of the leash to an arbiter’s soberly reflective perception and sharp eye for detail several feet away.

As one veteran judge told me years ago, “There is not a sport out there where transparency is more important. For conformation to remain relevant, communication between judges and all handlers, professional and owners alike, is critical. The quality of the dog, no matter the breed, depends on it.”