​The Joy Ride Is Just Beginning, and This PTSD Veteran Is All Smiles Now 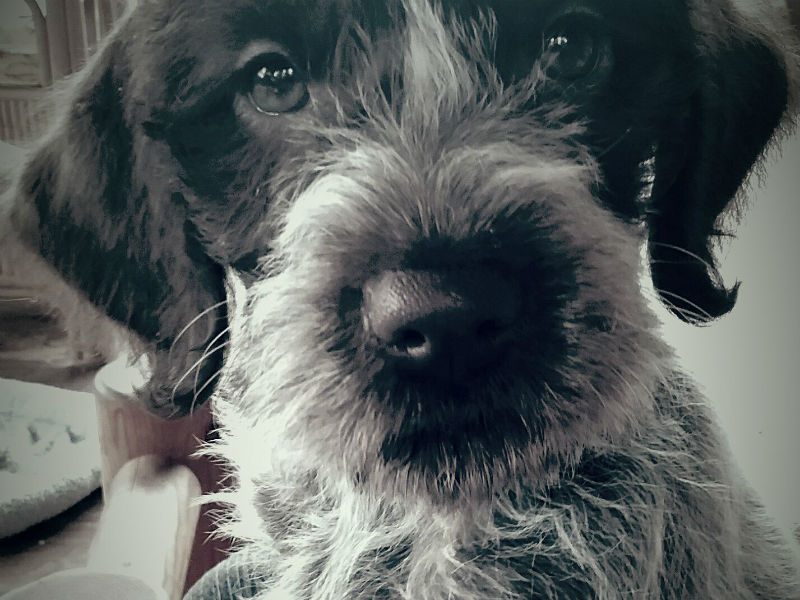 She radiates joy, but it’s her fighting spirit that defines the heart of a 13-week-old German Wirehaired Pointer that is about to embark on a coast-to-coast flight to a new home.

Appropriately, Joy is her name. And, adds her breeder, Laura Reeves, of Grants Pass, Ore., “This is the case of the right dog at the right time.”

Early this month, she will be joining her new owner, Shenandoah Ellis-Ulmer, of Newton, N.J., who was medically retired from the air force in April 2016, due to combat-related Post-traumatic stress disorder (PTSD), after serving 21 years and four months as an intelligence analyst on seven assignments, chiefly in the Middle East and South Korea.

“It was basically a matter of me compartmentalizing what I experienced in a high-stress environment,” Ellis-Ulmer explains. The job called on her to analyze terrorist executions, looking at the minute details on video. Next, she was asked to write detailed reports on what she viewed, and then her analysts were required to release them within 72 hours.

“To this day, I can see and hear those sounds. I will never get them out. Those videos, along with other experiences, finally presented themselves in the fashion of insomnia, anxiety, panic attacks, fear of crowds, but mostly anger,” she adds.

“The public just doesn’t understand what veterans with PTSD go through. My therapist, Dawn Grey, said to me, ‘You have a lot of guilt, but you don’t have external injuries. All your injuries are internal. You feel unworthy of having the title combat veteran attached to your name, because you don’t have any wounds to show for it.’ I said, yes, I don’t feel worthy enough to call myself a combat veteran. She asked me, ‘If you had no legs would that make you feel worthy?’ I had no response.”

Today, she is hoping the best prescription to combat those haunting internal injuries is not one of those long-fangled, difficult-to-spell medications, rather a simple one called Joy.

While several thousand miles separate the two women today, Reeves and Ellis-Ulmer connected in April 2015 at a dog show in Walla Walla, Wash., where the latter’s German Wirehaired Pointer, Steve, was being presented. “My dog’s breeder, Meg Eden, told me that if anyone can show Steve, Laura’s the one,” Ellis-Ulmer recalls. She was right; Reeves quickly guided Steve to his championship.

A wide array of breeds have been in Ellis-Ulmer’s life since childhood, including Labrador Retrievers, Great Danes, a Rat Terrier, and a Cavalier King Charles Spaniel. Joy will be the fifth dog (two Great Danes, a German Wirehaired Pointer, and a Cavalier) in the family for her and her husband, Michael, who is also a retired combat veteran with PTSD.

The couple recently purchased a “dream house” on six acres, five of which are fenced, with plans to convert part of a garage to an outside dog kennel with heating and air conditioning.

When Ellis-Ulmer began searching for a service dog, a German Wirehaired Pointer was certainly not on the top of her list. “Steve is extremely active and too smart for his own good some days,” she smiles. She ruled out several other breeds for a variety of reasons.

When Joy became “something of a social-media darling” on Reeves’ Facebook page earlier this year (she was called “Itty Bit” then), Ellis-Ulmer became intrigued, since the tiny puppy seemed to mirror her own spunk and determination.

“I read Laura’s Facebook update on Itty Bit to my husband and broke down crying. I finally opened up to him about all the deep-rooted emotions building up inside me. He sat on the couch holding me, and I looked up at him and said, ‘This puppy is supposed to be here with me.’ And he responded, ‘Go get her.’

“I told Laura about my desire for a service dog and how Joy could help me. Without hesitation, Laura said she was sent here for a reason, and this is it.”

Throughout the rearing process, Reeves has updated Ellis-Ulmer with photos and the health progress of Joy and even began puppy obedience training.

Here’s a microcosm of the dog’s medical battles:

The smallest member of the litter, she nearly died at birth as a result of not having enough room in the bitch’s womb to develop properly. Weighing in at less than half the size of her boisterous littermates, she faced numerous complications going forward. Reeves and a rotating cast of friends and family cared for her with bottle feeding (goat’s milk), extra nursing rotations with the mother, and lots of hands-on contact. To maintain warmth, she was kept in a makeshift incubator the first several days and given antibiotics, probiotics, and supplements to allow her to heal and grow.

Joy remained with her littermates for more than one month, until it became clear she would need surgery, Reeves says.

At four weeks and four pounds (still half the size of her siblings), Joy underwent reconstructive surgery by Dr. Heidi Buehner-McKenzie, of Allen Creek Veterinary Hospital in Grants Pass. The complex procedure involved reattaching the body wall and making certain all her tiny parts were in the right place.

Says Reeves, “In 35-plus years of breeding dogs, I have never attempted to save a puppy in this dire a situation. I know only a few folks who tried and none of the offspring survived. She literally is a miracle.”

Stacey Belt, a friend and client, was there at the time, too. “Laura and I brought Itty Bit home that night, said a little prayer, and midway through the night, she slept in my arms. She has been a fighter, survivor, and inspiration since. Did we have hope? Yes! Were we realistic? Yes! But there was something about this puppy, something ethereal, her nose, connection, and dedication that was evident from the start. You don’t save them all, no matter how much you want to. But she asked to be given the chance.”

Following the operation and back home, she had to be kept separate from the others in order to prevent the larger and rougher littermates from injuring her. At that point, the 11 others had been weaned, hence Joy was moved to the “Princess Room,” where she stayed with her mom for a couple weeks and recuperated.

“Due to the adhesions in her intestines from the initial problem,” Reeves says, “we struggled to get her to eat, gain weight, or maintain a solid GI function.” Finally, with another course of antibiotics and probiotics, she turned the corner and began growing consistently.

Joy is now big and strong enough to play with her brother, Bing, who Reeves is keeping as a show and performance prospect.

Joy and her 42-year-old owner will be setting their eyes on each other for the first time March 8 when Michael flies home with the dog from Southern Oregon.

Characterized in military context, Ellis-Ulmer sees Joy as a partner who will always have her back and allow her to trust others and venture out with confidence in public again.

Once home, the dog will be enrolled in basic and advanced puppy obedience classes, then on to her Canine Good Citizen test and, eventually, extensive service dog training.

For a beaming Ellis-Ulmer, Joy represents a ticket out of “that dark place into a bright, sunny new world.”