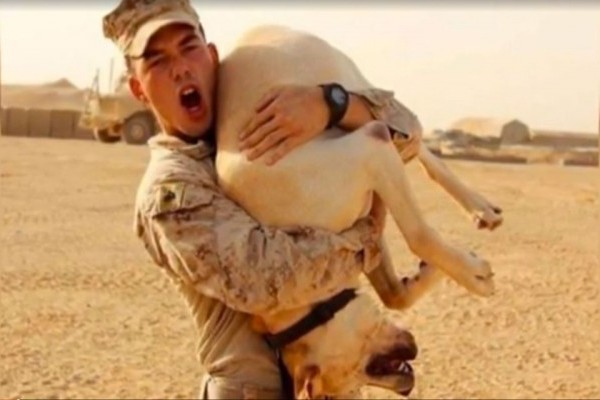 A veteran marine had his prayers answered this week. His dog, Rebel, who served with him for eight months in Afghanistan, was once again by his side.

Lance Corporal Andrew Harmon had been hoping to be reunited with the Labrador Retriever since his deployment ended several years ago. “I just prayed a lot for the dog. I was like, ‘God, I hope one day I get to see him again,'” Harmon said.

Rebel, now retired, had been living with a woman in North Carolina, but a diagnosis of a tumor on his leg brought him back to Harmon.

The woman who was caring for him was not able to pay for the surgery to treat the growth. Harmon knew he couldn’t let his former partner down—so he took him in. He and his family are using GoFundMe to raise the $5,000 needed for Rebel’s veterinary care.

“They spent 8 months in a war zone together. Rebel comforted my brother through some of the scariest things in his life,” Harmon’s sister, Michelle, wrote on the fundraising page. “This is my brother's chance to take care of him for life.”

In addition to the physical problems, Rebel suffers from PTSD. Harmon reports that the Lab sometimes has nightmares, and they are able to comfort each other. “We get to hold each other in the middle of the night.”

Rebel worked as an IED detection dog, and Harmon claimed he protected the men from several bombs.

“He was one of the best out of every dog there,” Harmon said. “‘I’ve had numerous dogs before but the bond wasn’t like this. I can’t describe it.”

See a video of Rebel in his new home, bonding with Harmon's young daughter here: