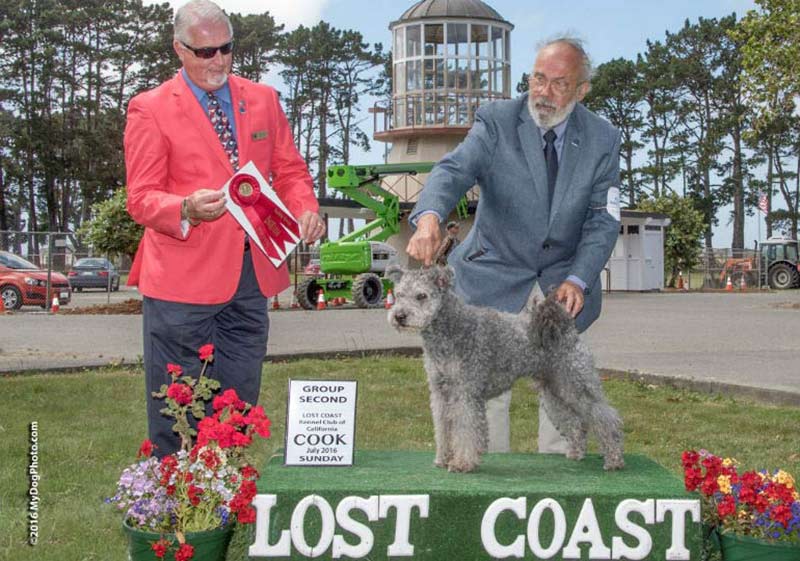 Once the American Kennel Club provided full recognition to the Pumi July 1, Gumby has been on a mission – and in the process notched his way into the breed and AKC record books.

The 14-year-old dog, owned by Chris and Tom Levy, of Salem, Ore., has become the first of its breed to earn an AKC championship and second to win a group (herding) placement (two Group 2s). In other words, he was as hot as the sizzling summer weather last month.

An import from Hungary at age 2, Gumby has competed internationally, winning a wide mix of titles in addition to being a four-time Best of Breed winner at the Hungarian Pumi Club of America National Specialty. He is also the first Pumi to gain an AKC Herding title, AKC Coursing Aptitude title and AKC Certificate of Merit title for conformation.

“We had hoped that Gumby would be the first AKC champion, but as time went on and it took longer than expected to fulfill AKC’s requirements for breed recognition,” says Chris Levy, “we had given up hope that he would last long enough.”

But when the breed was recognized July 1, the couple held out a sliver of hope Gumby would pull it off. Since then, they have been on 6,000-mile road trip competing in six all-breed shows in California, Texas, Wisconsin and North Dakota.

“If he could take Best of Breed at five shows, he could get his championship,” she explained. He won those titles at the first three and a Group 2 July 3 at the Lost Coast Kennel Club Dog Show in Ferndale, Calif. The following weekend he finished his championship in two more shows, and to top that off, he added a second Group 2 at the Santa Maria Kennel Club Dog Show in Camarillo, Calif.

“He has really been our dream-come-true dog,” she adds.

Learn more about the Pumi here.

Header photo: Tom Levy, of Salem, Ore., is shown with Gumby after winning Best of Breed at the Lost Coast Kennel Club Dog Show in Ferndale, Calif., in early July. Gumby went on to take a Herding Group 2 in the event, the highest placement yet for a Pumi in an AKC all-breed dog show since the breed was formally recognized July 1.