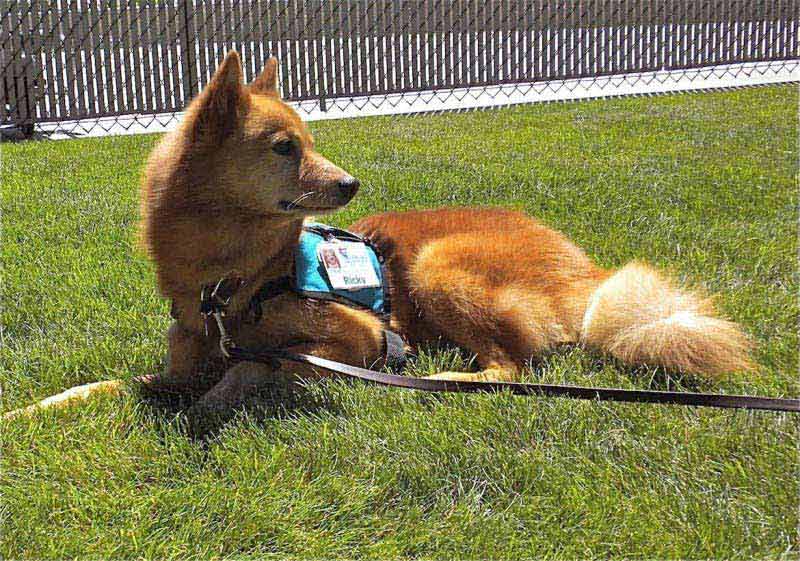 The distinctive traits of the Finnish Spitz are what make them good hunting dogs—and also outstanding therapy dogs.

The Finnish Spitz is an insanely curious breed. They want to know everything. Each has his or her own way of finding out.

Some are pushy and intrusive. Others are so subtle you’d think they’d rather be sleeping. But rest assured, each and every one of them has all receptors out, quivering on overtime, sponging up information, processing it, and making judgment calls.

Most of us have seen videos depicting therapy dogs providing comfort to people in crisis. We have seen how these dogs fit right into the situation, and engage with people according to what the people need. The particular quality that dogs bring to these situations is an undemanding, interactive presence.

This is where the Finnish Spitz differs a bit. They demand. They’re not jerks about it; they simply understand that, with humans at least, the capacity to give as well as take is of paramount importance in any healing process. So they make it happen, because the very best a dog can offer a person under stress is the impetus to reach out and connect.

One of the most rewarding aspects of working with a therapy dog is watching that connection take place. All of us, regardless of our breed, are familiar with it. What I’ve heard from Finnish Spitz owners, though, are tales describing insistence on who they will visit and what they will do with that person. They do not take orders or even pay much attention to suggestion here.

I myself have witnessed a variety of behaviors with individual patients, patient’s visitors, and staff members at the facilities we’ve worked at: an intense gaze directed at a woman having a psychotic episode, resulting in calmness. A relaxed, smiling “sit” at bedside, while a stroke patient moved their arm for the first time in order to give pats and even scratches. Poking and prodding another stroke patient, who became exhausted with petting—or so he thought, until his impromptu physical therapy session was over, according to the dog. Initiating a trip down an elevator then through strange corridors to find his favorite staff member, whose office space had been relocated. And when one patient did not want to visit with a dog, any dog, but did want to admire the beauty of mine, my boy obligingly struck a pose at a discrete distance, holding it until she was done.

One of the most poignant encounters wasn’t even an official therapy visit. My dog and I often hung out in the patio of a favorite coffee shop. One day he waived his normal first order of business (chomping a bagel), and instead went directly to a man sitting nearby. Next thing I knew, he was sitting between the man’s legs—in a position he only assumed with me—and was getting himself a good, vigorous rubdown, with the intimacy reserved only for a dog and his person. He shot me a glance that said, clearly, “Don’t sweat this, it’s OK.”

I watched my dog belong to someone else for about 10 minutes. Then the man found his voice, explaining that he’d put his own dear dog down just a few days prior. Everything clicked into place. My Ricky had run straight into the deep, silently screaming hole of a stranger’s heart, filled the void, and gently climbed out with him.

That is how a Finnish Spitz does therapy work.

Anita Thomas is a breeder and exhibitor of Finnish Spitz and has owned the breed since April Fools’ Day 1973. She has worked with the breed in a number of venues requiring training, specifically working with Ch. Maru's Ricky Raccoon, THD, the first Finnish Spitz to earn both therapy and herding titles. During Anita's long membership in the Finnish Spitz Club of America she has held several board positions and served as parliamentarian and on many show committees. She has also created artwork for merchandise for the breed's national specialty.

Finnish Spitz are eager, friendly, and faithful companions. Learn more about the breed here. If you think this breed is right for you, check out the AKC Marketplace for Finnish Spitz puppies.