Dog of Dallas Healthcare Worker with Ebola Will Not be Euthanized 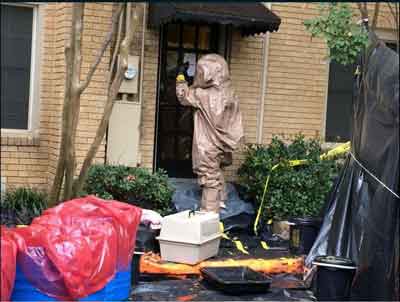 Dog lovers around the world breathed a sigh of relief when they learned that Dallas has quarantined the dog belonging to Nina Pham, the Dallas nurse who contracted Ebola.

“Bentley is in his new temp home. He’s wagging his tail and eating dinner. DAS will oversee his care,” Syed tweeted. In a later tweet, Syed promised to post photos of Bentley as soon as Pham has seen them.

“If that dog has to be ‘The Boy in the Plastic Bubble,’ we’re going to take good care of that dog,” Dallas County Judge Clay Jenkins said.

As soon as the infection was confirmed in Pham, cyberspace was buzzing with fears that Bentley might face the same fate as Excalibur, the dog in Spain belonging to a nurse who contracted the disease. Despite global outrage and a petition with 400,000 signatures, pleading to spare his life, Spanish authorities killed the 12-year-old rescue dog and incinerated his remains.

It is unknown whether dogs can contract or spread Ebola.

In a statement, the U.S. Centers for Disease Control and Prevention (CDC) says, “At this time, there have been no reports of dogs or cats becoming sick with Ebola or of being able to spread Ebola to people or other animals. Even in areas in Africa where Ebola is present, there have been no reports of dogs becoming sick with Ebola. There is limited evidence that dogs become infected with Ebola virus, but there is no evidence that they develop disease.”

The American Veterinary Medical Association has set up a page on its website, answering questions about the disease.

If you're an urban or suburban dog owner, you're likely familiar with the local dog park. It's a canine oasis. The "Dog Park Etiquette" E-book outlines what you should consider before you bring your dog to the dog park.
*Turn off pop-up blocker to download
AKC Privacy Policy
Founded in 1884, the not-for-profit AKC is the recognized and trusted expert in breed, health, and training information for dogs. AKC actively advocates for responsible dog ownership and is dedicated to advancing dog sports.