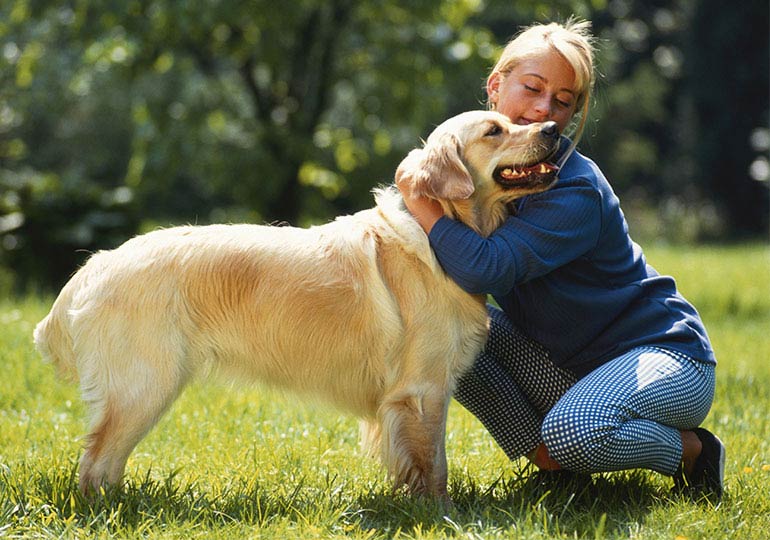 Bad news for people who love to hug their dog.

While some canines, especially those trained as therapy dogs, can tolerate this interaction, in general, dogs do not enjoy it.

Dogs rely on body language as a method of communication with humans and each other. Putting a limb over another dog is a way of exerting dominance and can be confusing and intimidating.

AKC Family Dog columnist Stanley Coren recently addressed this misconception in a Psychology Today article. For his research, he examined 250 photos of people hugging dogs and noted the level of the dog’s stress based on body language linked to anxiety, like ears that are pinned down, half-moon eyes (showing the whites of the eyes) or partially closed eyes, lip licking, and head turning. He found that about 81 percent of the photos showed a dog demonstrating at least some level of stress or discomfort, and 10 percent of the dogs seemingly feeling “neutral” about the experience.

That's not to say they don't love affection from their people, but most dogs prefer a belly rub or a back scratch to a squeeze. Also, the act of hugging requires that the person put their face next to a dog, which can be dangerous.

Parents should teach children about the proper ways to approach and pet a dog, especially one they've never met before, to avoid any accidental injury.

“Save your hugs for your two-footed family members and lovers,” Coren wrote, in conclusion. “It is clearly better from the dog's point of view if you express your fondness for your pet with a pat, a kind word, and maybe a treat.”

Your Dog is Trying to Tell You Something. You have questions, we have answers. Download this e-book to get the explanations behind some of the strangest canine behaviors.
*Turn off pop-up blocker to download
AKC Privacy Policy
Founded in 1884, the AKC is the recognized and trusted expert in breed, health, and training information for dogs. AKC actively advocates for responsible dog ownership and is dedicated to advancing dog sports.