5 Ways of Looking at a Saint Bernard 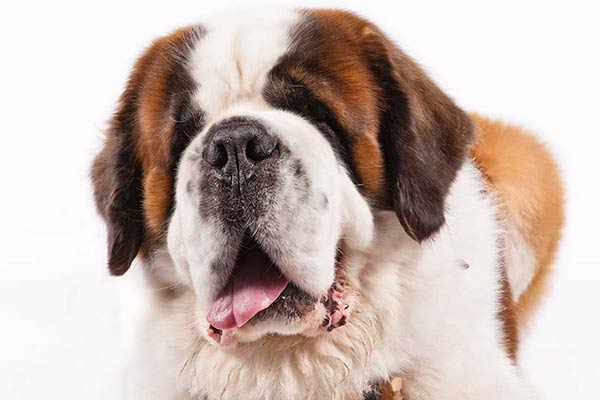 It would take more than one article to tell the tale of the mighty Saint Bernard in its entirety. Like the dogs themselves, the long, colorful history of the breed is just too big to be easily contained. Instead, here are five snapshots of the majestic Alpine rescue dog at various moments in time.

1. The Saint Bernard didn’t really begin to resemble its modern form until the early 1800s, but similar-type dogs were present in the region now known as Switzerland since ancient times. The Germanic tribes who inhabited the area and periodically raided the Roman Empire used their canine giants as war dogs. Even the most battle-tested Roman legions were said to quail before these fearsome, four-legged goliaths.

The Romans, of course, had their own dog of war: the ferocious Asian Molosser. Breed historians posit that the Saint Bernard’s 1,600-hundred-year march to the AKC Working Group began when Molossers were bred to the native giants of the Alpine valleys.

2. A Saint named Barry is among the most famous dogs who ever lived. He lived at the Hospice of St. Bernard, a refuge for pilgrims crossing the treacherous passes of the Swiss Alps on their way to Rome. Between 1800 and 1814, Barry saved 40 human lives.

The hospice monks were training Saints for rescue work long before Barry’s time. (“They have a breed of noble dogs whose extraordinary sagacity often enables them to rescue the traveler,” Oliver Goldsmith wrote of the monks in the early 1700s. “Though the perishing man lie 10 or even 20 feet beneath the snow, the delicacy of smell with which [the dogs] can trace him offers a chance of escape.”) It was the legendary Barry, though, who cemented the Saint’s worldwide reputation as Alpine rescue dog supreme. So great was Barry’s renown that his name became synonymous with the breed: An old Swiss moniker for the Saint was “Barryhund.”

3. Sorry, folks, but the original rescue dogs of the St. Bernard Pass didn't wear little casks of brandy around their necks.

In 1820, a 17-year-old British artist named Edwin Landseer had his first great success with a painting titled “Alpine Mastiffs Reanimating a Distressed Traveler.” The huge canvas depicts an unconscious avalanche victim. Surrounding him are two Saints. One barks for help as the other licks the traveler’s hand in an attempt to revive him. From one of the dog collars hangs a cask, a whimsical detail wholly invented by Landseer just to add a little something to his picture. (Surely the hospice monks, with long experience in Alpine rescue, knew the debilitating effect of alcohol on those suffering from hypothermia.) Landseer’s stroke of inspiration caught the public’s fancy, and the brandy cask became the enduring symbol of the Saint Bernard.

The boy artist went on to become Sir Edwin Henry Landseer, RA, England’s peerless painter of canine themes and Queen Victoria’s favorite artist. And Saint owners today still adorn their dogs’ collars with casks on special occasions—but it was the Saint’s amiable good nature, not brandy, that warmed the hearts of weary travelers.

4. As a breed, the Saint Bernard was in a sorry state by the turn of the 20th century.

“The breed has changed remarkably since my grandparents’ day,” Myers told the AKC Gazette. “In the family scrapbooks are photos of Sea View Abbess. She was the dog of the day. But look at the picture: She’s practically swaybacked! If you trotted her out today, they’d laugh you out of the ring.”

U.S. fanciers of the early 20th century made it their mission to return the Saint to its former glory. Good Saints still existed, and breeders looked to these dogs as their templates of breed type. One such dog was a British ring champion named Frandley Stephanie, seen here in Maud Earl’s famous painting “I Hear a Voice.”

A dog-show judge of the era wrote that if breeders would use Stephanie as their guide, “they will soon bring Saint Bernards back to the position they once held in public estimation.” By mid-century, after generations of judicious breeding of domestic stock and imports, Saints once again looked like Saints. (For more on “I Hear a Voice,” see “Picture Perfect.”)

The kids really want to keep the adorable stray puppy who wandered into their tidy suburban home. The fastidious Newton—after several choruses of “Please, Dad, please, can we keep him?”—finally relents, only to watch in horror as the little fuzz ball grows into 200 pounds of slobbering, shedding Saint Bernard.

Critics dismissed “Beethoven” as a throwback to the kiddie-matinee fodder ground out by Disney in the 1960s and ’70s. But despite tepid reviews “Beethoven” made sweet music at the box office, to the tune of a combined $110 million gross for the film and its hit sequel.

Producer Ivan Reitman, riding a hot streak that included “Stripes” and “Ghostbusters,” shrewdly crafted “Beethoven” as critic-proof entertainment guaranteed to be, as Hollywood publicists like to proclaim, “fun for the whole family!” Reitman commissioned a script from John (“Ferris Bueller’s Day Off”) Hughes sufficiently silly for kids but sharp enough for grownups, and then assembled a cast of expert farceurs led by Charles Grodin, using the same quirky, deadpan delivery that upstaged Robert DeNiro in “Midnight Run.”

The chief selling point of “Beethoven,” though, was Beethoven. There hadn’t been a Saint Bernard pop-culture star since the “Topper” TV series of the 1950s, and audiences were ready to renew their fascination with this magnificent breed. For a few years in the early ’90s, drool was once again cool.

Learn more about the breed from the experts at the Saint Bernard Club of America. For video of a Saint rescue dog in training, see “The Big Guys.”