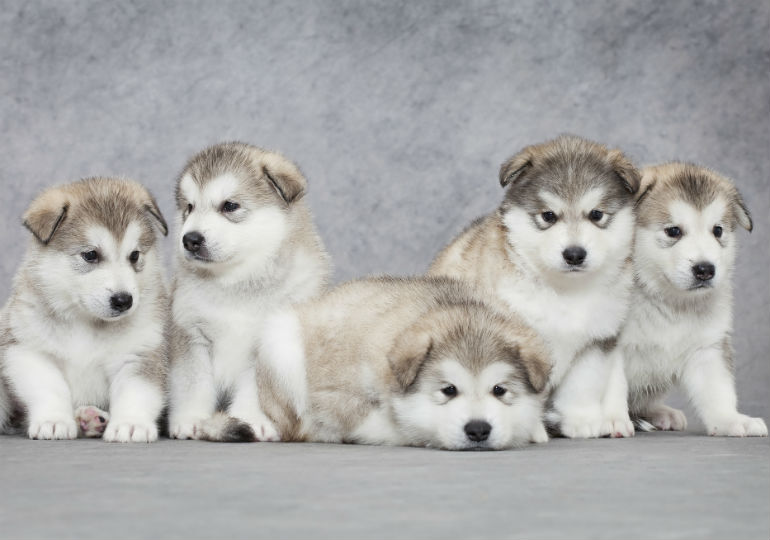 One of the oldest of the Arctic sled dog breeds, the Alaskan Malamute (Malamute) has a proud history of working and living in extremely harsh conditions. These tireless dogs are members of the Working Group, and their form and function directly relate to their origin of heavy freighting. They are not racing dogs, but are instead meant to pull hefty loads at slow speeds.

The friendly and devoted Alaskan Malamute may be one of the most ancient breeds of dog. It is thought they traveled across the Bering Strait many thousands of years ago with people from the Arctic regions of Siberia. Once in North America, they lived and worked with the Inuit, who depended on these dogs for their very survival.

Malamutes were mostly used for pulling heavy sleds, but other jobs included being pack dogs for supplies, hunting seals and other Arctic mammals, and protecting their people from bears. They did all this in brutally severe northern conditions and, as a result, they evolved to be powerful dogs with incredible strength and endurance. Their affectionate and loyal nature likely came from their close ties to their human family. The dogs often played with the children and slept in the family shelter to help keep everyone warm at night.

There was a huge call for working dogs during the Gold Rush at the end of the 1800s. Different breeds from outside the area were bred with native sled dogs to keep up with demand. This almost destroyed the Alaskan Malamute. However, the Mahlemut people, a native Inuit tribe who settled in the upper western regions of Alaska, had a remote and isolated existence. Their Malamutes remained largely pure, and it is from this tribe that the Malamute takes his name.

The Malamute should be more powerful and heavier than other Northern breeds, thanks to his heritage. Their face markings are a distinctive feature and consist of a cap over the head with either an all-white face or a face marked with a bar and/or mask.

There are still Alaskan Malamutes living a traditional life, but many live as family pets in warmer climates. That doesn’t make them any less athletic, and they are still able to enjoy and excel at a variety of activities such as sledding, backpacking, jogging, or agility with their owner. Another sport popular with Alaskan Malamute owners is weight pulling. These competitions involve dogs pulling a certain weight a certain distance in a set amount of time. In each successive round, the weight is increased, and dogs only advance to the next round if they can complete the pull.

Although they traditionally guarded Inuit campsites, Malamutes are not disturbed by the approach of strangers. Most actually crave attention from people. In addition, expect confidence and independence from your Malamute. This, along with their strong-willed nature, means they may not always get along well with other dogs of the same sex. They also possess sensitive personalities, so handle them with gentle care.

If you think the Alaskan Malamute could be the perfect fit for your family, make sure to check out AKC Marketplace to find available puppies!