15 Dog Movies for Every Dog Lover Out There 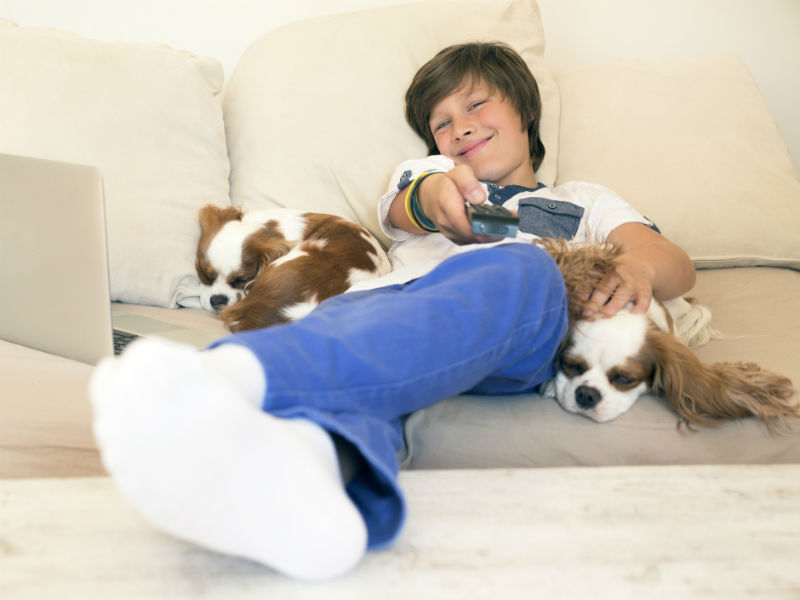 Winter is the perfect time to curl up on the sofa and watch a good movie. And who better to curl up with than your canine companion? Dog lovers have so many films about dogs or starring dogs to choose from that we thought we'd compile a list of some of the best dog movies ever. Whether you're a fan of comedies, adventure, animation, or even five-Kleenex tearjerkers, there's the perfect dog movie for you. We've also noted if and where the movie is available for streaming, so you can get instant gratification.

The Adventures of Milo and Otis

This 1986 film touches lots of bases—for dog lovers, cat lovers, kids, and adults. When Milo, the cat, and Otis, the dog, accidentally become separated, they embark on an adventurous and hazardous journey to find each other again. Did you know this film was originally released in Japan as “Koneko Monogatari”? Dudley Moore narrated a new comic English-language version.
Get it on Amazon.

If real-life adventure is more your thing, check out this film. It's about a pack of sled dogs that are left behind during a dangerous mission, and the human who rescues them after nearly six harrowing months in the Antarctic winter. This movie has action, adventure, drama, and terrific canine actors.
Get it on Amazon.

A buddy/cop movie with a twist! One of the buddies is a slobbery Dogue de Bordeaux and the other is Tom Hanks. It may not be the best movie Tom Hanks ever made, but it's a bit of a pop culture classic, especially among dog lovers.
Watch it on Netflix.

Animation naturally lends itself to stories about animals, and some of the best dog movies ever made have been animated films. Here are just a few:

Lady and the Tramp

This was Disney's first animated movie based on an original story, and the studio hit it out of the park. You probably saw it when you were a kid, but it still holds all of its charm for adults. And who can resist one of the most romantic date scenes ever? Skip the YouTube puppy videos, and go directly to “Lady and the Tramp.”
Get it on iTunes.

Go for the animated original, released in 1961. It's witty, charming, and surprisingly emotional, and you'll find yourself rooting for the 15 puppies and hissing at the classic villain, Cruella de Vil. One of the most popular Disney movies of all time, it's been re-released in theaters four times since its original launch.
Get it on Amazon.

All Dogs Go to Heaven

Released in 1989, this is a film for young and old, alike, although it may be a little intense for very young kids. It's got music, a great cast, including Burt Reynolds and Dom DeLuise, and a story line that raises it above many animated films. Although not a critical success, the film and its main character, Charlie B. Barkin, have made it a classic.
Get it on iTunes and on Amazon.

If you prefer your animation a little more sophisticated and current, try this stop-motion animated film by Tim Burton. Rendered in 3D and filmed in black and white, this Frankenstein story with a canine twist was nominated for an Oscar.
Get it on Amazon.

Based on a memoir by J.R. Ackerley, this movie is really geared toward adults rather than kids. It's a bittersweet story of the loving, but complicated bond between a lonely middle-aged man and the German Shepherd Dog he adopts. It's also the first animated film to be hand-drawn and then painted using paperless computer technology.
Get it on Amazon.

These movies may be old, made in 1943 and 1957 respectively, but they're timeless classics among dog movies.

Pal, the Collie playing Lassie, became something of a canine movie star in this deeply touching story about the love between a boy and his dog. Pal's descendants even played the title role in the subsequent TV series.
Get it on Vudu and Amazon.

Another film about the bond between boy and dog, Old Yeller is pretty much guaranteed to leave viewers, young and old, in tears. Some people consider this the ultimate dog film, and if you've never seen it, now's the time.
Watch it on Netflix.

Some people can't stand sad movies; others love nothing more than curling up with their pup and a box of Kleenex. This film is for you.

Based on a true story about a professor and his Japanese Akita. The bond between the two lasts beyond death. Directed by Lasse Hallstrom, who also directed “Chocolat” and “What's Eating Gilbert Grape,” this may be the saddest and most moving film in the history of moving pictures. Although Richard Gere stars as the main human character, the true star of the movie is the Akita.
Get it on Amazon.

And finally, some dog movies that don't fit neatly into any categorization and maybe are even more interesting and entertaining because of it.

This movie is about Belgian Malinois Max and what happens to him when his marine handler is killed. It shines a compassionate light on war dogs and their trainers, as well as the post-war consequences for both humans and canines.

Get it on Amazon.

Anyone who has ever participated in a dog show will recognize the truth behind Christopher Guest's hilarious mockumentary film. It tells the story of several hopefuls, each determined that his or her dog will win best in show. It features Guest regulars, like Fred Willard, Eugene Levy, and Catherine O'Hara, and plenty of show-worthy (and not so show-worthy) dogs.
Get it on Amazon.

It's got adventure, great outdoor scenery, and, of course, Chance (Michael J. Fox), Shadow (Don Ameche), and Sassy (Sally Field). What could be better than a Bulldog, Golden Retriever, and Himalayan cat on an outdoor adventure—with a happy ending?
Watch it on Hulu.

There are dozens of films that we haven't mentioned. What's your must-see dog movie?