Crates are Forever – Not Just for Puppies 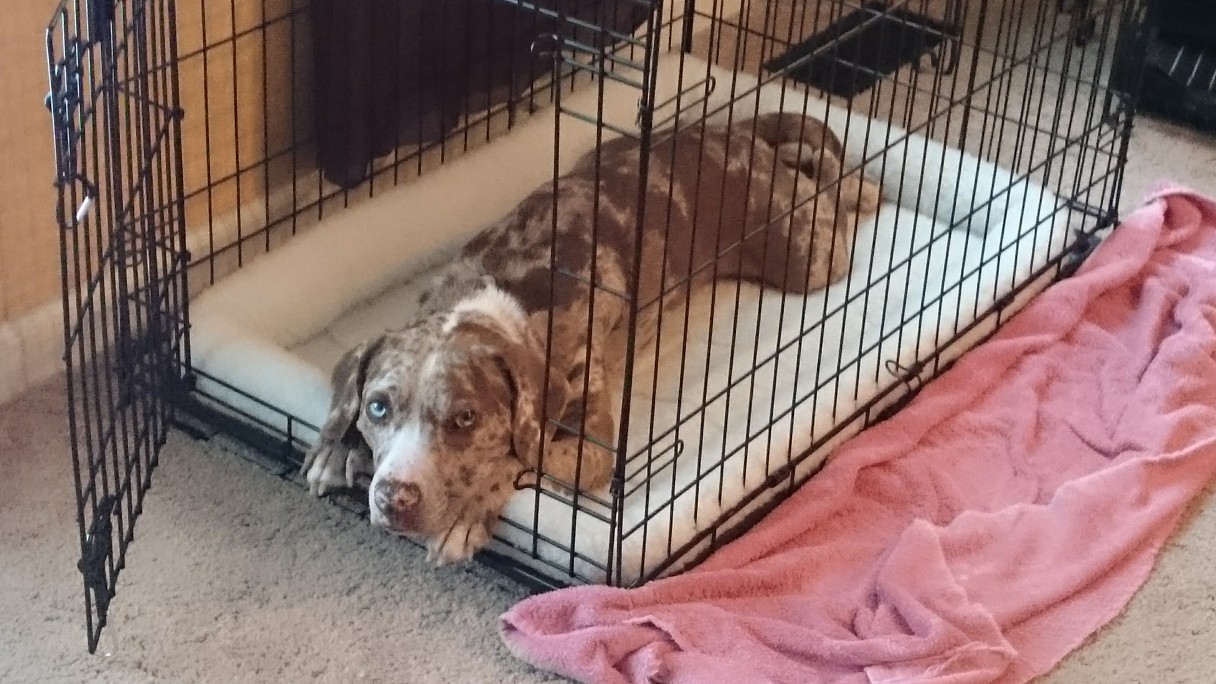 When talking with people whose dogs are regressing in housetraining or not sleeping as long as they could at night, our advice almost always includes using a crate.

“Oh, we used one for a while, but we put it away/got rid of it!” is the usual response. They feel guilty about putting their dog in a crate because they cannot imagine themselves being so confined. But dogs are not people, and when used properly as a safe, cozy haven, a crate can be your dog’s favorite spot whether the door is open or closed. You can see above that Boone, a member of the AKC Canine Partners program, loves his crate and often enters it to take a nap.

Where does your dog sleep at night? It’s a personal choice for every dog owner, but I somewhat regret starting the habit of letting our dogs sleep in the bedroom with us, albeit on their own beds on the floor. They like crates, but once we allowed them to sleep upstairs with us it was hard to go back. And to be fair, our home isn’t ideal for having three large crates readily available at all times. When they (and we) were younger, it was fine. But our quality of sleep has declined.

The two senior dogs make lots of less-than-soothing noises with their snoring and 3 a.m. personal hygiene routines. The younger one can hear our eyelids so much as flutter at 5:30 a.m. so he thinks we should get up and have breakfast and start the fabulous new day RIGHT NOW BECAUSE YOU OPENED YOUR EYES YES YOU DID! If he were sleeping in a crate downstairs, he’d snooze until 6:30 a.m., which sounds luxurious to me at this point.

If your dog is getting lots of exercise and attention, there’s no reason to feel guilty about using a crate for him. Too much real estate for puppies is overwhelming; they don’t know what to do with themselves in all that space. Having space to maybe run around in isn’t the same as meaningful, interactive exercise or training with you. It’s better to set your puppy up for success by using a crate than to give her access to things you don’t want torn up.

Keep a nice bed in the crate and always give a special treat when he gets in it. Food puzzle toys or hollow toys stuffed with food will keep him busy for a while. Put the crate in a quiet place – not completely isolated but not in front of a window or busy doorway. If it’s a wire crate, put a sheet over it to make it feel like a den, rather than open and exposed. Where would you prefer to sleep: your comfy bed in a darkened room or in the middle of a bright room, on display in a cage? Your dog feels the same.

Again, key to your dog’s well-being are lots of exercise and attention from you. A special place of her own, her crate, is something she and you will appreciate always.