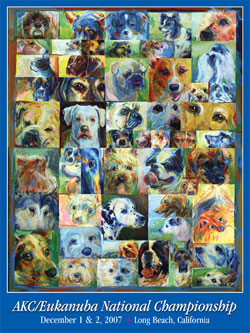 The American Kennel Club® and Eukanuba are pleased to announce that Kimberly Kelly Santini of Lake Orion, Mich. is the winning artist in the fifth annual AKC/Eukanuba National Championship commemorative art poster competition.

The winning piece, entitled “Many Faces”, is an acrylic painting laid down over giclee on canvas and depicts some of the faces of dogs from the artist’s year long project called “Painting a Dog a Day”. Santini has been painting the face of one dog each day for over a year. Her design best captured the contest’s theme “The Wonderful World of Purebred Dogs”.

Santini will receive $1,000 and a four-day/three-night trip for two to the AKC/Eukanuba National Championship in Long Beach, Calif. December 1-2, 2007.

A limited edition of 500 copies of the poster will be created. Santini will be available to autograph her work during the show at the AKC booth. The poster will also be sold on AKC’s website at www.akc.org. Proceeds from the sale will benefit Take the Lead, a not-for-profit foundation dedicated to providing direct services, support and care for all qualified participants in the sport of dogs who suffer from the devastating realities of life-threatening or terminal illnesses.

Santini, a painter by trade, specializes in animal paintings and pet portraiture, typically working in acrylics. This was her first venture into combining techniques. “The poster contest was the perfect excuse for me to experiment,” Santini said. She developed the “Painting a Dog a Day” project to spread awareness of issues related to responsible dog ownership. Many of the dogs she paints are from photos she has taken herself, requests from clients and dogs from rescue organizations. “I am very active in supporting the efforts of rescues. Twenty percent of the paintings’ sales from profiling rescue animals gets donated back to the host organizations,” added Santini. “In the last 6 months the project has raised over $1200 for shelters and rescues.” She says it is especially meaningful that her winning design for the AKC/Eukanuba National Championship will raise funds for Take the Lead. “To see it come full circle and benefit those at the other end of the leash, well, it’s a good feeling.”

“We are pleased to offer the proceeds to Take the Lead, an organization that has gone above and beyond in assisting members of our sport in times of need,” said Show Chairman and AKC Chairman Ron Menaker. “This is a great opportunity for dog lovers to take home a piece of the show while supporting a cause that works hard to give back to the sport.”