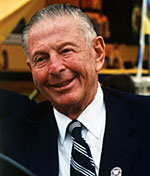 The Skarda Award Committee selected Jud Streicher as the 9th recipient of one of the dog world’s most prestigious awards.

In a career spanning almost sixty years, Jud Streicher has been a leader in the dog world in both obedience and conformation. He was the president of the first obedience club to be admitted to membership in the American Kennel Club. The year was 1953.

Since that time, his guidance and leadership has encompassed such well known clubs as the American Boxer Club, the breed’s parent club, serving variously as president, treasurer, and AKC delegate; the Westchester Kennel Club as delegate and president; the Westminster Kennel Club; Tuxedo Park Kennel Club; Port Chester Obedience Club and the Palm Beach Dog Fanciers.

Jud and his wife Gail bred and showed Boxers and an occasional poodle in both conformation and obedience winning many an obedience title and Best in Show.

He has judged over 100 obedience trials throughout the Country, only recently retiring to emeritus status.

The Streichers divide their time between Scarsdale, NY and Florida. They raise miniature horses and race horses. In their spare time they golf and fish and travel the world.

All this activity not withstanding, it is Jud’s quiet, supportive attitude and loyalty above all else that contributed to his winning the award. He typifies the “quiet giving of ones self” the award winners share.

When told of his winning, Jud said it was particularly meaningful to him as a long time friend and admirer of Lang Skarda as both a dog man and a person. The committee welcomes Judson L. Streicher as its 9th recipient.