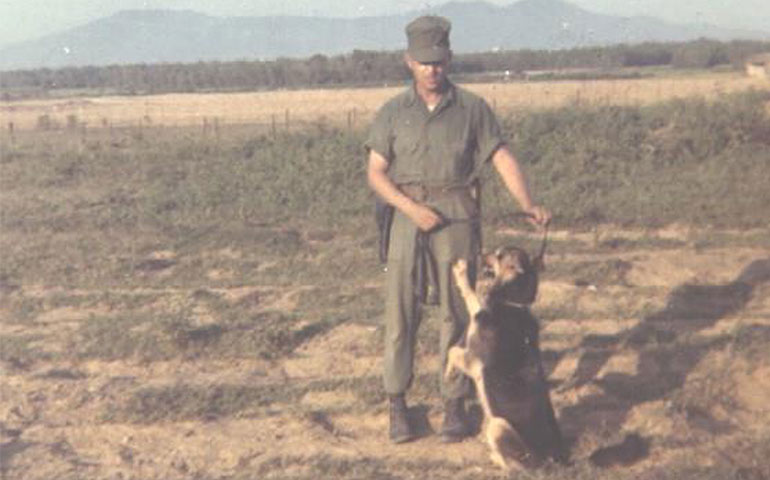 It was May of 1966, and Ron Aiello was on his first patrol as a new Marine, leading an inspection of two villages in Vietnam. His military working dog, Stormy, walked ahead of him with the other Marines following at a distance. As they reached a clearing, Stormy suddenly stopped. Aiello bent down on his knee and asked, “What do you see, girl?” Just then, a sniper bullet flew over his head.

“A Marine walking into that clearing without her would have been killed,” Aiello says. “She picked up a sound of a twig breaking or a safety being released and alerted to it—she saved my life.”

Aiello was deployed with Stormy, a German Shepherd Dog, for 13 months. Together, they led nighttime patrols to protect troops from ambushes—sometimes on nights so dark, Aiello would only know if Stormy was alerting by the leash going slack. Stormy and the other military dogs were trained to find explosives, weapons, humans, and booby traps. They worked as a team. “We knew our dogs—our dogs knew us,” Aiello says.

When Aiello’s tour ended, he had to turn Stormy over to a new handler. “I tried to do another tour, but they wouldn’t let me as a handler because the new guy wouldn’t have a dog to work with,” he explains. He got a few hours with the new handler to tell him all of Stormy’s likes and dislikes and how she communicates and alerts. He boarded a plane back to the United States—and never saw her again.

“Years later, I was able to track her up until 1970 by talking to three of her other handlers and some Marines who remember her,” Aiello says. “She was still working in Vietnam in 1970, but after that I don’t know what happened. I don’t know if she died, was abandoned, was euthanized.”

But it wasn't until a dog show in Philadelphia that he realized how to keep Stormy's legacy alive. In 1998, Aiello was invited to see a war dog exhibit at the show along with several other veteran handlers. “We were from different branches and different times of the war,” he says, “But we had one thing in common: We were dog handlers in Vietnam.” They bonded immediately and decided to share the story of their war dogs with as many people as they could.

They started traveling together on the “dog-show circuit,” hitting about two shows a month and educating people about the work the dogs did through telling their own stories and showing photos of their working dogs. “Many people didn’t even know we had dogs in the military,” he says. In 2006, the group succeeded in a six-year mission to have a memorial dedicated to war dogs at the New Jersey Vietnam Veterans' Memorial Foundation in Holmdel, New Jersey, a popular destination for educational field trips.

The group became a nonprofit, The U.S. War Dog Association (USWDA). Through the organization, Aiello and his colleagues serve as advocates for active and retired war dogs and their handlers.

For one, they work to provide medical care and prescription medication for retired military dogs and K-9s deployed by independent contractors. Aiello works with Red Bank Veterinary Hospital in New Jersey, which provides free medical care for former military working dogs, registered with the USWDA. Handlers pay only for transportation—the organization will even refund the handler's hotel stay while the dog is being treated. Also, 275 dogs have been enrolled in the prescription drug program.

He also helps to transport military dogs who were retired overseas to be rehomed with a former handler. (Once retired, the dogs can no longer legally fly aboard military aircraft, he explains.) And he has worked with lawmakers to help create, pass, and implement legislation supporting active and retired war dogs, including the most recent National Defense Authorization Act, which included a provision to provide transportation to all working military dogs so that they can be retired on U.S. soil. Unfortunately, President Obama vetoed the bill, for reasons unrelated to the dogs, on October 22.

In the meantime, Aiello helps military handlers get basic dog supplies, like harnesses, and runs Operation Military Care K9, through which individuals send care packages of snacks, toiletries, games, and other supplies to K-9 handlers for their personal use and for their dogs.

In spite of some setbacks, Aiello is impressed by how much the culture surrounding war dogs has changed since his time in Vietnam. “Back then, the only people who knew how well the dogs worked were the handlers,” he says. “Today, everyone knows what an asset they are. Higher branches know these dogs are saving thousands of lives. They have a retirement program and high-tech equipment. The respect for the war dogs has changed greatly.”

How You Can Help

You can also make a donation to the U.S. War Dog Association.