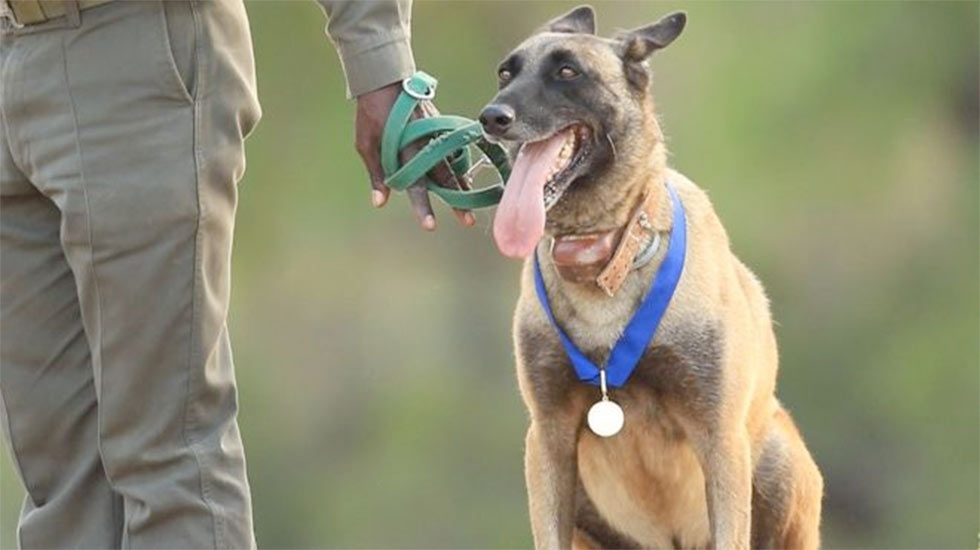 Given the lifesaving work he does, his name seems ironic. “Killer” is a 5-year-old Belgian Malinois who works in South Africa's Kruger National Park tracking and apprehending armed (and very dangerous) rhino poachers operating in this massive 7,500 sq. mile park. With his handler, Amos Mzimba, Killer's success rate is astonishing: Over the last four years, his skills have led to the arrest of 115 poachers.

Now Killer has been awarded the Gold Medal from the British charity, People's Dispensary for Sick Animals (PDSA,) which bestows the award on animal heroes. Mzimba, a member of Kruger's Special Operations Team, told BBC News, “It is an honor to have Killer by my side. It means a lot that he has been recognized for his skills.”

The rhino- and elephant poaching crisis in Africa has seen unprecedented levels of killing, putting both of these iconic species in danger of extinction within a decade. The war on poaching seems at times futile—the criminal syndicates (often terrorist groups) are well-armed and well-funded. Their motivation? Rhino horn sells for a staggering $65,000 per kilogram on the black market—more than gold. Tragically, the ancient ancient myth in many Asian countries that rhino horn is a miracle drug persists, and demand is skyrocketing.

But dogs like Killer are proving to be one of the more effective weapons in the fight to save an endangered species that has existed for tens of millions of years. When a poacher or rhino carcass is reported, the dog and handler team are flown by helicopter to the region to begin tracking.

“Thanks to him, we are arresting more poachers, but there is a lot more to be done if we are to save the rhino from extinction,” Mzimbo says.

The PDSA believes Killer's award is more than justified, saying that his contributions to the safeguarding of the remaining rhino population is “truly remarkable.” The PDSA gold-medal winner was announced by British comedian Ricky Gervais, who praised Killer's important work. “He helped capture dozens of poachers in the last year alone, thanks to his amazing courage and dedication,” Gervais said in a video posted on YouTube.

Another heroic and headline-grabbing Malinois recently received a PDSA award. Diesel was the 7-year-old police K-9 who died in the line of duty during a raid on the building where the Paris terror attack suspects were hiding out.

There are many other stories of dogs helping wildlife, such as this one.