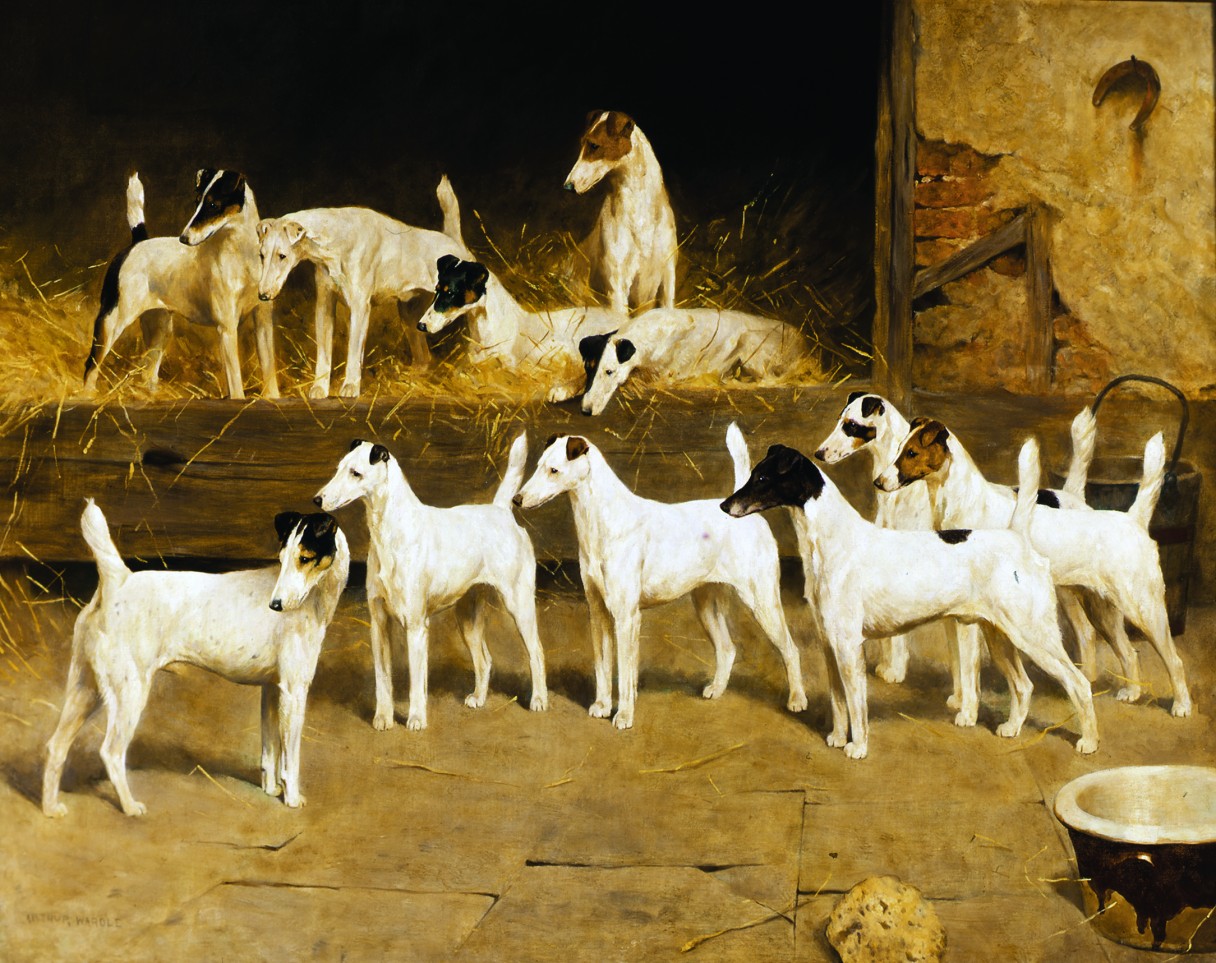 Francis Redmond’s “Totteridge” Smooth Fox Terriers were a famous British line of the late 19th century. Redmond was a master dog man who did much to standardize his breed, and the Totteridge kennel was pivotal in the creation of the modern Smooth.

It was the custom to immortalize dogs of such renown on canvas. These paintings were then used as templates for mass-produced prints that would hang in homes, taverns, and clubrooms. The plum job of painting the Totteridge terriers fell to Arthur Wardle (1864–1949), a self-taught animal portraitist who learned his trade during long hours of sketching at the London Zoo and at dog shows. By the time Wardle received Redmond’s commission in 1897 he was an established master, adept at portraits of both wild and domestic animals.

In an account given years later, Wardle said his work on “The Totteridge XI” was made miserable by Redmond’s meddling. The cantankerous sportsman looked over Wardle’s shoulder as he painted, insisting the artist improve the weak points of his prize terriers—a shorter muzzle here, a straighter topline there—to ensure their perfection in the eyes of posterity. But as the old proverb goes, smooth seas yield few pearls. The friction between Wardle and his patron produced a gem.

“The Totteridge XI” is a masterly example of perspective painting. Wardle creates the illusion of depth by leaving plenty of bright ground beneath the dogs and darkening his palette as he moves from foreground to background, with the sponge and basin in the near foreground completing the three-dimensional effect.

Wardle’s great challenge was how to group the 11 terriers, an unusually large number of subjects for a commission of this kind. He arranged the dogs on two levels, six on the ground and five in the hay crib above. One dog stands a head taller than the others, serving as the apex of the triangular arrangement.

Within the larger triangle, the dogs’ heads are arranged to form smaller triangular patterns. These are set off by the rectangular planes of the background and floor, with one perfectly placed vertical beam breaking up the composition’s horizontal drift.

When reduced to its abstract essence “The Totteridge XI” is a vague echo of that greatest of all group portraits, Leonardo da Vinci’s “The Last Supper,” an unsurpassed example of triangulation.

Leonardo’s mandate was the same as Wardle’s: to find a dynamic way to arrange a large number of subjects within a horizontal plain. Using the perfectly triangular figure of Christ as the focal point, Leonardo divided the 12 disciples into four subgroups of three figures each. The heads and hands of the disciples form triangular patterns set against the rectangular tablecloth, windows, and tapestries. (The Renaissance master and the Victorian animal painter shared another challenge: a pesky patron. The prior of Santa Maria delle Grazie, the church that houses “The Last Supper,” made such a pest of himself while Leonardo worked that the artist was sorely tempted to use the meddlesome priest as his model for Judas Iscariot.)

Wardle, like Leonardo, understood the visual power contained in the unreleased tension of triangles, especially when framed by static rectangles. The anonymous geniuses who built the Egyptian pyramids—huge triangles set against a rectangular horizon where sand meets sky—knew this principle and deployed it in its purest form. The art of ancient cultures the world over (the Hindus, Greeks, and Mayans, to name just a few) is rife with a similar fascination with triangles.

True, Wardle’s subject and scope were humbler than that of Leonardo or the pharaoh’s master builder, but it’s also true that his painting of the Totteridge terriers is more than just documentation of a celebrated kennel. It serves as a visual encyclopedia of art theory and history, from which any young artist can learn.

Not bad for a guy who never took a lesson.