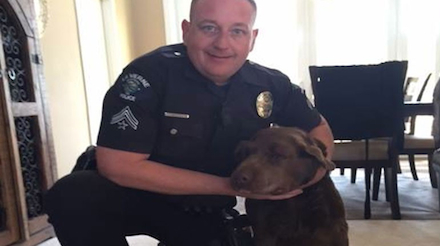 Rattlesnakes are a common sighting in Southern California, but that doesn’t make them any less deadly—a lesson learned the hard way by the family of a Labrador Retriever who has a police officer to thank for saving their pet’s life. On April 4, Officer Chris Dransfeldt of the La Verne Police Department received a call from a frantic 17-year-old who reported that her dog, Bailey, had been bitten in the face by a rattlesnake while in the backyard.

After speaking to the girl’s mother, who was at work and couldn’t get home in time to get Bailey treatment, Officer Dransfeldt volunteered to drive the dog to the nearest veterinary clinic, a Facebook post by the police department explained.

Unfortunately, that clinic did not have anti-venom needed to treat the bite. An employee informed Officer Dransfeldt that the only clinic to carry the antidote was in Upland, about eight miles away. He then rushed Bailey, whose face had begun to swell, to the second clinic.

After receiving treatment, Bailey was released to the family and is expected to fully recover.

Rattlesnakes are more active than usual this year as a result of the combined drought and El Niño, a press release from VCA West Los Angeles Animal Hospital warns.

The AKC Canine Health Foundation offers the following tips should your dog get bitten by a snake:

The foundation adds that a vaccine is available for field dogs who encounter rattlesnakes frequently. The vaccine is controversial, however, so owners should speak to their veterinarian about this and other preventative measures.