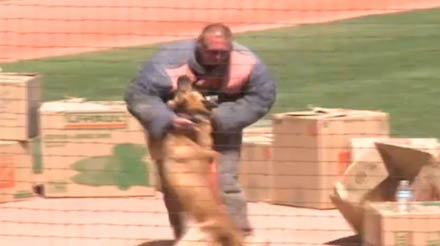 Police dogs and military canines came together last weekend to show off their skills at the Desert Dogs Regional K-9 Police Trials.

The trials, which were held in Arizona, tested the ability of K-9s in various events, including searching a building, detecting narcotics and explosives, and navigating an obstacle course.

The event in the video below is the handler protection competition, in which canines demonstrate how to apprehend fleeing felons and defend their human partners. During the trial, each K-9 team was confronted by two or more suspects, and one suspect from each scenario attempted to harm the handler. Teams were judged on the handler’s ability to control and redirect the dog and call off the dog as well as the dog’s courage and success at apprehending.

“It’s kind of a showcase for not only the handlers to have a little fun and show off their skills with their dog but it’s also a big thing for the community to show what we’re capable with our dogs,” K9 Officer Scott Callender with the Mesa Police Department told KPNX. He calls working with K-9s his “dream job,” adding that his father was also a K-9 officer.

See the dogs in action:

Read about AKC's new Canine Officer program, which recognizes all dogs who serve in government roles.