​Officer Inconsolable At Funeral Of His K-9 Partner, Killed By Friendly Fire 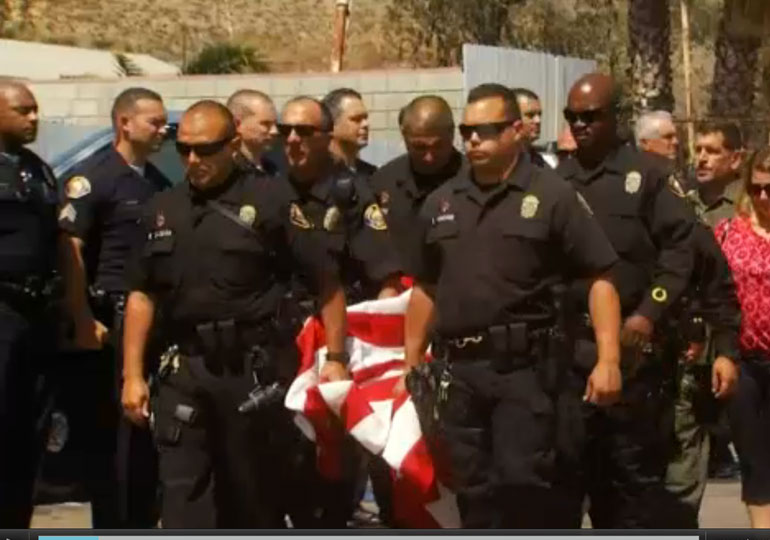 A 4-year-old police dog passed away Tuesday, June 28, while trying to protect his partner and other officers from an armed suspect during a SWAT call-out.

Credo, a Belgian Malinois with the Long Beach Police Department in California, was struck by gunfire while trying to apprehend a suspect that had charged at officers, NBC reported. While fighting with the K-9, the suspect pulled out a knife, prompting an officer to fire his weapon. Both Credo and the suspect were struck and killed.

This is the second K-9 partner Credo’s handler, Officer Mike Parcells, lost while on duty. In 2005, Belgian Malinois Ranger was killed by gunfire while trying to apprehend a suspect, according to CBS LA.

A video of the service dedicated to Credo, during which fellow officers salute the fallen K-9, show a distraught Parcells.

The police department stated that individuals wishing to make a donation to the Long Beach K-9 Officers Association in honor of Credo can do so at this link.

This year has seen a number of fallen K-9s while on duty. Two dogs this month alone passed away from heat exhaustion while tracking suspects, and Credo was one of eight to due by gunfire in 2016, according to the Officer Down Memorial Page.

The recent deaths have prompted several individuals and organizations to work toward raising funds for ballistic vests for working dogs. Anderson Cooper donated enough money to purchase vests for the entire Norfolk Police Department’s K9 unit, which lost K-9 Krijger earlier this year. And 13-year-old Corrine Woods raised close to $10,000 for vests for her local K-9 unit in Ohio. The state lost K-9 Jethro to gunfire in January.