Goofy Swissy Has Been There, Done That, and Isn’t Fazed by Much of Anything 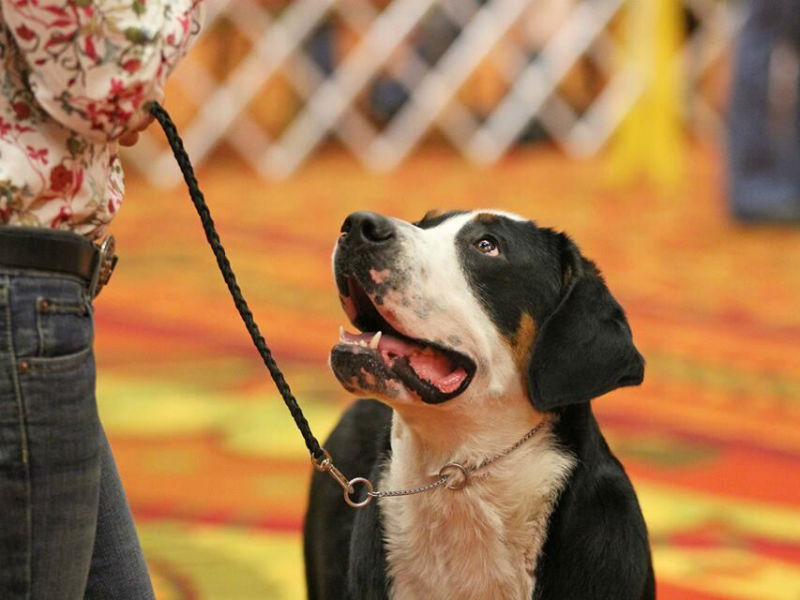 Nexpa and Holly Webb had a busy week at the Greater Swiss Mountain Dog of America National Specialty in Loveland, Colo., in September 2015. On this day — the Independent Specialty — she was awarded the second highest award for female champions in the ring in a field of over 100. During the week, the 17-month-old Nexpa competed in herding, rally obedience, obedience and conformation. Photo by Debbie Elliott.

She’s silly. She acts like the class clown. And you can add goofy to her profile, too.

But if you’re ever looking for a poster dog for adaptability, Nexpa should be at the head of your list, for she’s an embodiment of a dog that’s at home wherever she goes.

The 3-year-old Greater Swiss Mountain Dog has seen it all — from being born on the North Rim of Grand Canyon National Park at an altitude of 8,827 feet, to cavorting about Manhattan last February at the Westminster Kennel Club Dog Show. In between, she’s visited dozens of cities and towns and flown thousands of miles.

She calls home a three-acre farm in Three Rivers, Calif., a Sierra Nevada foothill village at the main entrance to Sequoia and Kings Canyon National Park, where one of her two owners, Jeff Webb, is stationed as a law-enforcement ranger. His wife, Holly, is a certified public accountant who handled Nexpa to an American Kennel Club conformation grand championship, before handing over the reins to professional handlers earlier this year.

“Our interest in showing and other activities ebbs and flows and is influenced a lot by where we live,” Holly Webb explains. “For example, when we lived at the Grand Canyon North Rim and showed Nexpa’s mother, Wookie, we attended only one or two shows a year. In 2014, after moving to Three Rivers, we exhibited Nexpa about 35 times over 20 weekends in conformation, since we were in closer proximity to dozens of Northern and Southern California shows.”

Admittedly a goal-oriented person, Webb focuses Nexpa’s entries toward specific achievements. In 2016, she sought to place the dog in the Top 10 of AKC’s National Owner-Handled Series. By year’s end, bull’s-eye. She was the No.2 bitch and No. 6 Greater Swiss Mountain Dog in the competition.

“I showed Nexpa in as many shows as I could get to that offered National Owner-Handled Series competition. Last year, I lived in Yosemite National Park and Sequoia National Park areas and traveled with her as far as Arizona and Las Vegas on multiple occasions. I would often get up in the dark, drive four or more hours to the show, and return home the same day, as sometimes the owner-handler was offered only one day or I could only squeeze in one day.” Between Jan. 1 and April 15 — the peak of the tax-preparation season — she entered only three events. And Nexpa was held out of the show ring for two months when she had her first litter.

From the beginning of her show career in 2014, through the AKC National Championship in Orlando, Fla., last December, Nexpa was shown exclusively by Webb. “This year I wanted her to go to more shows than I could attend,” she explains, so she turned her over to professional handlers.

At 6 months old, Nexpa enjoys a photo op with owners Jeff and Holly Webb at the entrance to Sequoia National Park in November 2014.The “Indian head” is a famous photo stop at the park.

With swagger and verve, the 128-pound Nexpa was a natural at Westminster. Since she was born on the chilly North Rim, New York’s cold February temperatures did not pose a challenge for this sturdy campaigner.

In December 2014, the couple took the 8-month-old puppy to Trek to the Tree, an annual holiday ceremony at Grant Gove in Kings Canyon National Park, where she was introduced to snow. “We have a home in Yosemite, and we go there often in the winter, so Nexpa has plenty of experience in snow. If she finds even the smallest patch in Yosemite, she loves to roll around in it and lie on her back, with all her feet up in the air.”

Because Webb travels with her often, Nexpa is adept at visiting new places, plopping down in hotels, and competing in a wide mix of venues.

“She attracted a lot of attention on the streets of New York City and in our hotel, where she trotted down the hall like she owned the place,” Webb laughs. “She went with us exploring a nearby park and Times Square. She had a blast. I put rubber boots on her feet that protected them from the salt. And we wiped down her feet, legs, and belly after every trip outdoors to remove all the salt residue.”

The Westminster adventure included two travel days, two tourist days, and two show days. Since it was at the heart of this CPA’s busiest season, flying was the only option for Team Nexpa. Webb had an opportunity to send Nexpa to New York City with a friend who was driving. “But I thought it would be better for her to spend less overall time away from me and home, so that I could keep her in peak physical condition and in a positive emotional state leading up to the show.”

What crowds see of Nexpa today is a far cry from that high-altitude fluff ball of North Rim days. The Greater Swiss Mountain Dog standard calls for a very dense coat with an undercoat. The elevation and climate of the dog’s residence influences the coat to some degree, as does the dog itself, Webb adds.

“The puppies born at the North Rim were the fluffiest I have seen. They looked almost like another breed. So while we can’t be sure, I know that dogs can have similar health issues to humans, and we know that for humans, being above 7,000-feet elevation is significant. It is our guess that they were extra fluffy due to the elevation.”

Aug. 13, 2014 was moving day for the Webbs and Nexpa from the Grand Canyon National Park North Rim to Sequoia National Park. Note the very fuzzy Swissy puppy, from living above 8,000 feet.

While offspring in Nexpa’s recent litter seem heavy-coated, the Webbs have compared photos with those of her and her littermates on the North Rim — and they’re markedly different. “We called them ‘plushies,’“ she laughs.

And speaking of labels, what is the origin of Nexpa?

Webb replies, “In early 2014, one of my rock-climbing friends, Sean O’Leary, was killed in a base-jumping accident in Zion National Park. He was a special person who treated everyone with kindness and non-judgmental acceptance. Afterward, I was unable to work effectively for weeks and would find myself sobbing at my desk.

“He had a skinny mixed-breed (Greyhound/Rhodesian Ridgeback) with him most of the time, which was a bit reserved and skittish. Her name was Nexpa, the name of the surfing spot in Mexico where Sean found her. Naming my new puppy after his dog was part of my healing process.”

Nexpa’s Three Rivers home is a stark contrast to the Webbs’ previous residences inside the national parks, from which they walked their leashed dogs for miles on paths and to campgrounds. “In spite of the fact that parks are not easy to visit with dogs, they are fantastic places to live with dogs,” she notes.

To compensate for the change, they purchased the largest property they could find in Three Rivers that was already fenced for dogs and had plenty of flat areas for training and a large number of shade trees, since Holly was not accustomed to living in a hot area, nor are Swissys very heat tolerant.

Nexpa has plenty of four-legged company at home, including two other Greater Swiss Mountain Dogs, Echo, 6, and Pixley, 5 months, along with her five puppies, born June 8. And there’s Paco, 16, and Tucker, 23, standard-size donkeys, which the Webbs obtained from a person who was moving away from the area. “We had the barn, hay barns, pasture, and all equipment in place for livestock and no one occupying that space,” Webb says.

One of Nexpa’s favorite times of the day is interaction with the donkeys, Paco, left, and Tucker, when the Swissy engages in barking, play bowing and running.

While a fence separates the donkeys and the dogs, they interact with their fun and engaging version of tag. The donkeys, Webb says, have a large amount of pasture, and if they choose not to connect with the dogs, they can easily stride away toward the woods. Instead, in the mornings as the Swissys are patrolling around, the donkeys meander up to the fence as close to them as they can get. “They wait for the dogs to come over. When the dogs decide — one opts and others charge together like a school of fish — to move toward the donkeys, they begin jumping and barking. Then the dogs, especially Nexpa, run playfully up and down the fence line with the donkeys. They stop and sniff each other, jumping, if needed, to make nose contact.”

Donkey-dog tag is a good example of the personality of this playful, puppy-like pooch, who loves nothing more than family movie night, complete with popcorn.