These Dogs Were Near Death In A Burning House, Then Firefighters Worked a Miracle 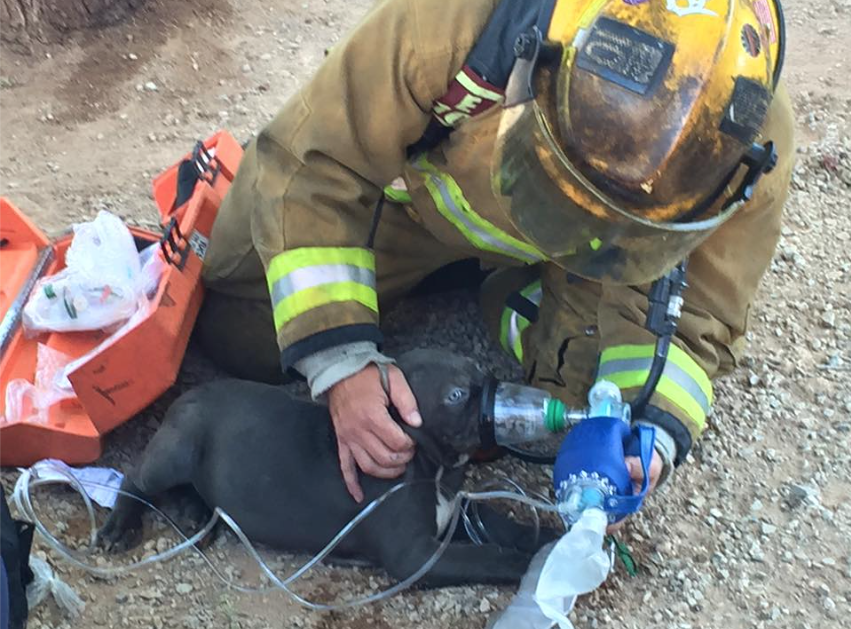 Arizona firefighters showed both heroism and heart when they dashed into a burning house in Tucson at around 7:30 a.m. on Oct. 14, and rescued two dying dogs.

They rushed the limp creatures outside, where other members of their team immediately got to work, administering oxygen with the Tucson Fire Department’s (TFD) pet CPR kits.

A 12-year-old boy was also inside when the fire broke out. He had been was alerted to the danger by the barking of the many dogs living in the house and escaped through his bedroom window. He was in the yard with a few dogs when firefighters arrived, according to Tucson News Now. Four other dogs died in the blaze.

One video posted on TFD’s FB page, shows how the CPR kit was used to save the life of an adult dog.

“A happy ending for this big one. Didn’t look good when crews handed him out the window, basically lifeless. A few minutes of Oxygen and he’s back on four legs,” the department wrote.

This second video shows a puppy getting a breath of life. “So glad this little girl is going to live to bark about it,” TFD quipped on Facebook.

So happy this little girl is going to live to bark about it.

The firefighters had sophisticated equipment, including oxygen masks sized to fit an animal’s muzzle. But an average dog owner can be a hero by learning basic first aid techniques save a life in an emergency. The American Red Cross is one of a few outfits that offers courses and DVDs that can teach the basics.

This infographic from Kurgo highlights some lifesaving moves: